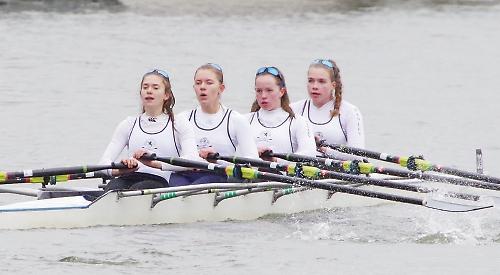 AFTER a long break without competition, last Saturday saw the Henley Rowing Club’s juniors back with a vengeance at Hampton Head, one of the major junior heads with nearly 700 crews competing.

Henley had 30 crews competing across both boys and girls and from the youngest U13s at their first event to the top juniors who will be looking to compete for GB at this year’s Junior Worlds.

The Henley juniors returned from the event with eight outright wins, two silvers and three bronze.

The WJ15 quad of Holly Cookson, Georgie Pollard, Darcy Smith, Della Luke and cox Maddison Sturgess picked up a gold in what was the largest category of the day with more than 40 entries.

The girls started first in their division and raced over the course at a solid rate of 30 pulling away from the crews immediately behind them but kept the pressure on knowing there would be strong opposition further back in the field. The Henley crew won by 1.2 seconds against Latymer Upper with Marlow in third place just over six seconds behind.

The WJ15 coxed four of Poppy Wilson, Holly Thompson, Emilia Fulford-Dobson, Holly Nave and cox Chloe Beeton rowed well to pick up a third place in a boat category for which they have had limited boat time. They were just seven seconds behind Lady Eleanor Holles School.

Two wins came in Division 1 in the double sculls. The WJ16 double of Carla Russell and Charlotte Rowley triumphed by more than 20 seconds while the WJ18 double of Georgie Robinson Ranger and Lottie Orr also triumphed a similar margin.

The WJ18 coxed four of Phoebe Fletcher, Grace Johnson, Alice Jones and Emeline Warner put in a strong performance to win by 10 seconds. Phyllis Barter, Sophia Hahn, Daisy Butterworth and Rebecca Lister had a powerful row in the WJ18 coxless four where they triumphed by just 0.6 seconds.

The WJ16 coxed four of Georgia Brown, Amber Weller, Phoebe Snowden and Amy Howard had a good row to finish a comfortable second.

After coming second at the previous three head races, the

The Henley boys’ J15-18 squad had a disrupted day with no less than four athletes missing through flu. This led to last minute crew changes and scratchings. Despite this the performance of the crews in J18 quads stood out.

Henley was the only club or school to have two boats in the top 10 in a quality field of 30 crews. The crew of Balthasar Issa, Bruce Turnell, Ethan O’Connor and Lewis Howlett, despite having to race in a competitive vacuum because of a low start position, came fifth behind Maidenhead, Windsor Boys’ School, Westminster School and Tideway Scullers, but ahead of local rivals Leander and Marlow. The B crew of John Yolland, Oliver Taylor, Seth O’Connor and Joe Sidgewick finished 10th.