Host club bag most wins at fours and eights head 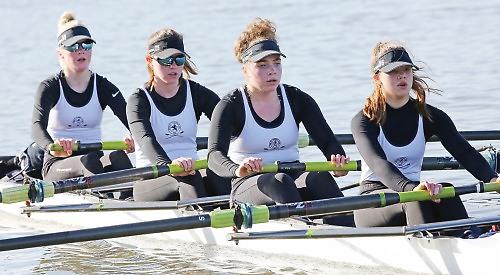 LAST Saturday’s Henley Fours and Eights Head benefited from near perfect weather conditions as almost 200 crews raced from Hambleden Lock to the regatta finish in the first major event of the year.

The river flow was up a little on normal following rain during the previous week but this did not deter Imperial College, London, from dominating both divisions with their men’s eight winning the first division in a time of 10 minutes two seconds against the Leander development academy crew Star and Arrow, who were 10 seconds behind in second place over the 3,000m course.

The Leander crew was composed entirely of young, inexperienced athletes who are looking to make their mark at the Thames Challenge Cup at Henley Royal Regatta in less than five months’ time.

Speaking after finishing second coach Ted Bainbridge said: “It was a good, strong performance that placed them well up behind Imperial College, and a big step-up from their last outing at the Quintin Head a couple of weeks ago. There’s plenty of work still to do but I’m pleased with their progress so far.”

Imperial College also recorded the fastest time in the afternoon second division with their open coxless four in 11 minutes, 32 seconds. Their women also won the women’s coxless fours in the morning.

Host club Henley Rowing Club competed well with a complete cross-section of the club taking part from U14 junior boys through to masters.

The club recorded five wins, making it the most successful club of the day. The wins came in the open J16 coxed four, open J14 coxed quad, WJ15 coxed four and WJ18 coxed four in the morning followed by the WJ14 coxed quad in the afternoon.

The J14 boys’ quad of David Wallace, Zac Charles, Olly Deacon and Jamie McLellan with James Oldham as cox enjoyed an emphatic victory in their event against their opposition, overtaking the crew ahead by Temple Island and drawing away from the field throughout the race.

The WJ15 girls’ squad of Emilia Fulford-Dobson, Della Luke, Holly Thompson, Darcy Smith and cox Maddison Sturgess continued its winning run and had limited opposition as they triumphed in their event comfortably but their time was quicker than the winners of WJ16 4+ and both bands two and three of the senior women’s events.

In the afternoon the girls were joined by Georgie Pollard, Ava Reineke, Poppy Wilson and Holly Cookson to compete in the senior women’s band three open eights event as there were no other J15 entries.

A creditable performance saw them finish second in their category and strong enough to beat another 18 senior women’s eights from clubs and colleges from across the country.

For the WJ14 girls it was the first time they were racing big local opposition from Headington School in Oxford, who entered four crews in a division of 11. The crew of Natalie Schoenmakers, Laoise O’Donohue, Mia Roullier, Bea Bethell and cox Daisy Rolstone powered over the course to win by an impressive 57 seconds.

Upper Thames also had success as one of their open masters coxless four crews won their event.