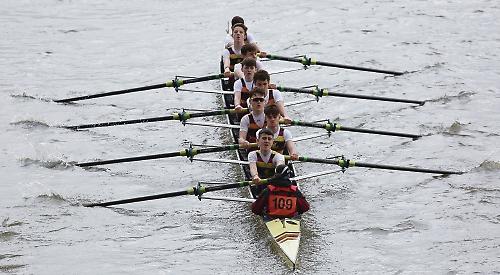 The college entered seven crews into this prestigious event, which took place on Monday along the famous 6.8km stretch on the Tideway in London involving 356 crews from schools and clubs across the country.

As reigning champions, the Shiplake first eight were first down the course and achieved a time of 17 minutes, 0.3 seconds which, once all 15 championship eights had finished, left them in second place, beating Eton College, Abingdon School and Radley College. St Paul’s School, rowing on home waters, won by 20 seconds and also set a course record.

The girls championship fours saw Shiplake come sixth out of 22 crews. The second eight were sixth, third eight seventh while the J15 B crew finished 11th.

Speaking after the event, Shiplake’s director of rowing David Currie said: “The first eight’s result was nothing short of remarkable. They proved that great spirit and team work outweighed their power deficit to their opposition.

“The results lower down the club were also fantastic and show that we have some strength coming through over the next few years.”