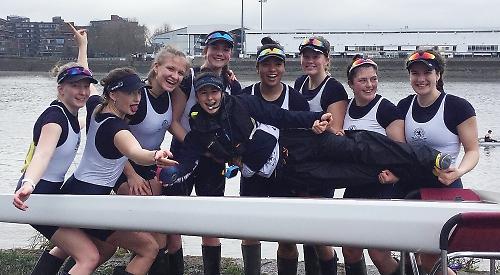 HENLEY Rowing Club’s junior squad set new course records and came away with numerous wins in three head of the river races in the space of four days.

At the women’s head of the river held on the Tideway on Saturday Henley had two entries. The first eight had a stand-out row winning the school/junior pennant for the first time and placed 14th in country beating many university first eights in a time of 19 minutes, 44.4 seconds. The second eight followed with an equally impressive row placing fourth out of the junior eights and 44th overall.

Monday brought the juniors back to the Tideway for the schools’ head of the river where the Henley girls claimed three wins with two new course records.

A strong row down the course saw the Henley eight win by 11 seconds beating Headington School and the record by 10 seconds in a time of 18 minutes, 18.0 seconds.

Next came the Henley J16 eight where a powerful second half allowed them to win by nine seconds beating Surbiton High School and the record by 39 seconds in a time of 19 minutes, 2.2 seconds.

The Henley school/junior coxed four made impressive steps through the second half of their race giving them the two seconds they needed to win their event while the Henley J15 eight also put in a good performance to finish second.

The Henley junior boys’ J16 coxless quadruple scull crew won their event in a time of 18 minutes, 14.3 seconds, beating Tideway Scullers School by 0.7 seconds. At the OARSport junior sculling head held at Dorney on Tuesday, the junior girls came away with an almost clean sweep of the girls’ sculling events with first places in six events (WJ18 4x, WJ18 4x B, WJ18 4x C, WJ17 4x, WJ16 4x and WJ15 4x) and second places in two events (WJ15 8x and WJ14 4x). Speaking after the sucessful three days rowing, Miriam Luke, president of Henley Rowing Club said: “Congratulations to all the crews and coaches for the outstanding performances at the women’s head, schools head and the sculling head. All the hard work in the gym and out on the water through this very cold winter has been rewarded. A phenomenal achievement for a local club. We are very proud.”

Following the successes on Saturday and Monday, Olympic gold medallist and TV presenter Matthew Pinsent took to Twitter to congratulate the girls adding “that is a gauntlet of some size gone down there!”