Leander's crews set pace at head of the river races 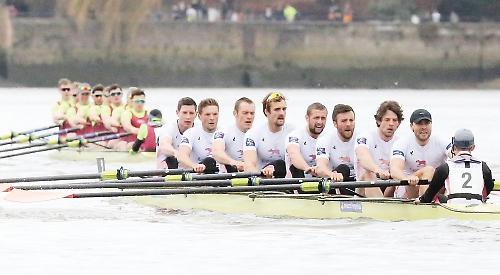 AGAINST all the odds Leander athletes notched up a double success at the weekend, with an emphatic win in the women’s eights head on Saturday and a dead-heat for first place with Oxford Brookes in the men’s head the following day.

With a significant number of their GB athletes either sick or injured the portents were not good in advance of the weekend, which marked the first time the men’s and women’s events had been held on successive days.

Only six GB women were able to boat for Leander, including Olympic silver medallist Karen Bennett in the seven seat, but club athletes Emily Ashford and Emily Ford stepped up to the mark as the crew mounted their defence of last year’s title.

Cambridge University, looking to peak for the women’s boat race in two weeks’ time, were widely tipped to reverse last year’s result and snatch the title, but Leander extended their four-second margin to sixteen seconds over the four-and-a-quarter mile championship course from Mortlake to Putney.

Leander’s second crew, composed entirely of development athletes, came storming through the field from their starting position of 52 to finish ninth overall.

Just 24 hours later it was the turn of the men, who were looking to avenge their 2016 defeat by Oxford Brookes after last year’s race was cancelled due to adverse weather conditions.

Leander were once again under strength, but Olympic champion Tom Ransley was in the seven seat, with Rio finalist Al Sinclair behind him at six.

Brookes set off in pole position with Leander in hot pursuit, but the gap remained constant, and when judges examined their times they could not separate them with any degree of confidence.

Speaking after the race Leander chief coach Mark Banks said: “Obviously we would have preferred a clear win but Brookes were overrating us by two pips all the way down the course, they were outstanding.”

Behind their lead boat the scratch Leander crew of experienced seniors managed a creditable fourth place overall while the young Thames Cup group finished inside the top 20 with 16th place.

Despite sharing the win in the men’s head the weekend’s results mark the end of a memorable winter season for Leander, who recorded wins in both the men’s and women’s divisions of the fours and eights heads for the first time in their history.