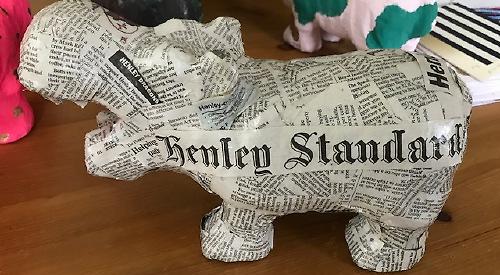 A COMMUNITY art project launched by Leander Club in Henley seems to have captured people’s imagination.

In February, the rowing club launched Hip Hip Hooray to mark its bicentenary year and gave out 200 papier-mâché hippos to artists, schools and community groups to decorate however they liked.

A hippo has been part of the Leander logo since the mid-1800s.

To date, all but a handful of hippos have been returned and what a of lot of creative effort has gone into transforming them.

Many children took a traditional approach, paintingtheir hippos in traditional colours with accessories akin to their natural habitat.

However, many others used a degree of interpretation.

Artist Linda Saul called her creation King of the River, as the hippopotamus amphibius is known.

She says: “When I got my hippo to decorate I was fixated by the big gaping jaw.

“Aware of the reputation the hippo has for attacking boats, of which I have personal experience, I had the idea of inserting a single rowing scull in the mouth.

“The red, white and blue bunting is a reference to the contribution that Leander has made to Team GB Olympic medal hauls and was inspired by photos of the open-top bus tour after the 2012 Olympics.”

Pete Reed, a triple Olympic champion and a Royal Navy lieutenant, made a “self-portrait” by painting a naval uniform on his hippo and attaching three gold “medals” to represents his achievements at the Beijing Games in 2008, London 2012 and Rio 2016.

He says: “Mini Monkie loves bananas, so obviously pink hippo with yellow bananas for my design. A flying hippo to celebrate both Leander’s 200th and the RAF 100th anniversaries.”

Henley Music School’s hippo, called Coriolanus, is covered in sheet music and plays Brahms when you pull a trombone on a pull-string.

Another hippo is covered with pages from the Henley Standard.

Caroline Mulcahy, the club’s house manager, says: “We are really happy with how Hip Hip Hooray has been embraced by the community and have been overwhelmed by the responses.

“We have had hippos covered in all sorts of things, such as feathers, glitter and lots of pink paint.

“Some artists have taken it very seriously and pollyfilled their hippos and sanded them down to make them really smooth. Valley Road Primary School thought about the famous local people, such as Debbie McGee and her late husband Paul Daniels, and decorated their hippo to reflect them.”

The hippos will be going on display at the River & Rowing Museum on Tuesday, May 22 for the day with free entry. That evening Leander will preview its exhibition, The First 200 Years, which documents the club’s history, and will run from May 23 to July 16.

The figures will also be used in this year’s regatta window display competition in which shops decorate their windows to a theme and it’s hoped to create a sort of arts trail between the participating businesses.

Later, some of the hippos will be auctioned, including a gold one which will be signed by five-time Olympic champion Sir Steve Redgrave, chairman of Henley Royal Regatta.

The proceeds will go to the Kafue River & Rowing Centre in Zambia, which promises to deliver benefits in clean water, education and wildlife, including hippos, on the Zambezi river.