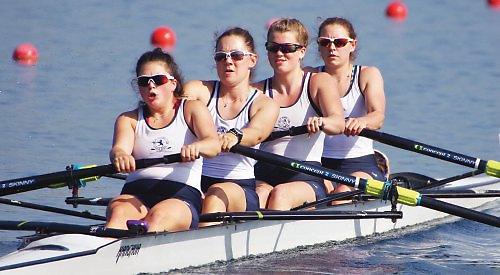 THE bank holiday weekend was particularly busy for the Henley Rowing Club junior squad with crews competing at the Junior Sculling Regatta on Saturday and Wallingford Regatta on Sunday — both held at Dorney Lake.

The Junior Sculling Regatta had more than 500 entries where a time trial for the first round saw the crews seeded into finals.

A second gold medal in the A final came from Holly Cookson in the WJ15 single sculls winning her time trial by nine seconds over St Edward’s School and then going on to take an early lead in the final which she continued to extend to take an easily victory.

In WJ15 quads Georgie Pollard, Izzy Cotten, Darcey Smith, Holly Thompson and cox Maddison Sturgess pulled back from third place in the time trial to take second place and a silver medal in their A final.

Poppy Wilson, Holly Nave, Della Luke, Ava Reineke and cox Chloe Beeton finished their time trial in 10th place but pulled it back in the B final with a good race which saw them leading to the last few hundred metres when they where pipped by Latimer Upper. This still gave the Henley quad a silver medal for second crews.

Both girls’ J15 double sculls Annabelle Hoogenberg with Riley Butcher and Emilia Fulford-Dobson with Gina Segrt made the A final, with Fulford-Dobson and Segrt guaranteed a gold medal even before the final started being the only club second boat to make the A final. Sunday saw most of the squad return to Dorney for Wallingford Regatta, the big first regatta for both seniors and juniors.

The boys’ J16 quad of Euan Turnell, Seth O’Connor, Edward Roy and James Swinburn picked up the first win for Henley with a straight final victory which saw them lead from the start and have a comfortable 10-second victory against Sir William Borlase.

In the afternoon the girls’ U15 eight of Poppy Wilson, Gina Segrt, Holly Thompson, Darcey Smith, Della Luke, Izzy Cotten, Georgie Pollard, Holly Cookson and cox Maddison Sturgess also had a straight final where they eased to a four-length victory over Marlow in second spot. The girls’ U18 coxed four of Maddie Pollard, Daisy Butterworth, Grace Johnson, Phoebe Fletcher and cox Ella Nolson had an eight- second win in their semi-final to qualify them for the final in which they led from the start and continued to extend their lead to take the win, finishing 12 seconds ahead of Marlow RC.

The fourth win of the day came from the boys’ J18 quad of Lewis Howlett, Balthasar Issa, Bruce Turnell and Ethan O’Connor. From three semi-final heats Henley qualified for the final with an outright win and the fastest time. The final was close and at halfway Henley led but Leander development Star and Arrow crew were only a second down and overlapping them was Lea RC. Going into the final 500 metres Henley and Star and Arrow had moved away from Lea but still overlapped one another. With less than a third of a length in it the Henley eight put in some good sculling to take the win by 0.25 of a second.