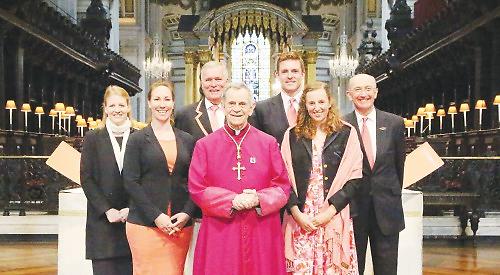 ONE of the highlights of Leander Club’s bicentenary year took place at St Paul’s Cathedral in London, where choral evensong was attended by almost 200 members as well as members of the public.

As the congregation took their seats, organ scholar James Orford played a selection from Handel’s Water Music as well as pieces by J S Bach and Percy Whitlock.

The choir and ministers then processed into the cathedral accompanied by the guest preacher, Mark Jabalé, Emeritus Bishop of Menevia and a Leander member.

The service ended with an act of thanksgiving led by Caroline Mulcahy, assistant manager at Leander, and Paul Mainds, chairman of the club’s bicentenary committee.

Following the National Anthem, Leander members repaired to the crypt where they were able to enjoy an informal supper together.