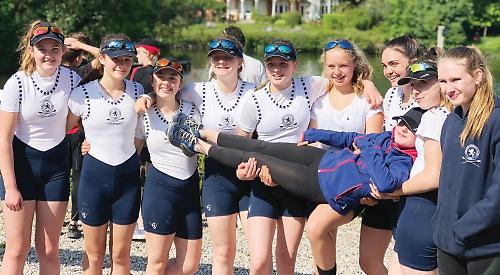 LAST Sunday saw some of the younger and newer members of the Henley Rowing Club Junior squad competing at Maidenhead Junior Regatta, a regatta aimed at the less experienced youngsters from the Berks, Bucks, Oxon and Hampshire clubs.

The sunny day started with the J13 boys’ crew of Kieren Drennan, Ollie Roullier, Connor O’Shea James, Louis Swinburn Johnson and Cox Jasmine Stirling in an exciting first race ending in a dead heat against a crew from Guildford which meant they had to return to the start and race again, beating the opposition by one-and-quarter length the second time around. The Henley crew then went on to win the division overall after beating Great Marlow and Eton Excelsior over the next three races.

The girls’ B1 crew with Hannah Boddy, Caitlin Swinburn, Lilly Hoogenberg, Anya Marsten and coxed by Athena Hall had four races over the day, competing against crews from Maidenhead and Headington, Lady Eleanor Holles and finally beating the second crew from LEH by two lengths to win the overall division.

The J14 boys’ crew of Joe Hart, Zachary Charles, Jamie MacLellan and cox James Oldham with the able assistance of Eleanor Taylor from the J13 squad raced well in the heat and semi-fianl but narrowly lost the final to a strong Maidenhead crew.

Henley and Guildford Rowing Club shared the best overall club prize having gained a similar number of wins on the day.