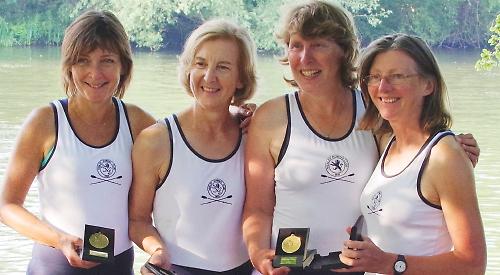 THE two extremes of Henley Rowing Club’s squads competed at Weybridge Ladies’ Regatta last Sunday, from the youngest under 13-year-old through to the women’s masters crew at age category E.

Henley was the most successful club at the regatta coming away with 12 wins with success at every age group.

The traditional regatta, two boats side-by-side and a free start (no stake boats) makes a change from multi lane courses for the crews.

Whilst traditionally a ladies-only regatta the regatta does now admit boys crews.

The J13 squad had a mixed days racing. The boys double of Ollie Roullier and Connor O’Shea James had a tough race in the semi-final against a crew from Guildford RC holding a half length distance behind the opposition for the whole course but was not able to make up the gap.

The two girls doubles also lost in semi finals, with the A crew of Lucy Jones and Hannah Boddy having a tough race against a solid crew from Reading.

The girls’ A quad with Lilly Hoogenberg, Gabby Chaplin, Sophie Graham, stroke Ailish Harkin and cox Francesca Whittle went on to win the division convincingly against a crew from Guildford RC.

The J14 girls large entry of double sculls and quads where split across three division with Henley having a double in all three divisions and a quad in two divisions.

The doubles of Natalie Schoenmakers and Josie Sawbridge and Charlotte Beadmore and Ella McKay all came away with medals, with a third double just missing out in the final to a strong Reading crew.

Schoenmakers and Beadmore then joined Laoise O’Donohue, Molly Collings and cox Daisy Rolstone in their quad, to race three more times and win more medals. Sawbridge and McKay teamed up with Mia Roullier, Posy Gummer and cox Katy Pickup to do the same in the other division. In total, the U14 squad ended the day with 14 medals

Not to be out done the J14 boys of Zachary Charles and Jamie Mclellan won their first round and semi-final easily and in the final their opposition was disqualified due to steering issues.

The J15 girls came away unbeaten. Della Luke came from behind in each of her single sculls races before eventually winning the final against Burway.

Holly Cookson, competing at J16, made easy work of her races winning all comfortably. Holly Nave and Gina Segrt competed in WJ15 doubles beating Wimbledon High School in the first round, Walbrook RC in the semi-final and Etonian Excelsior in the final.

The WJ15 eight had no opposition so competed in the women’s open eights event where they had a straight final against Staines Boat Club. The Henley crew of Poppy Wilson, Emilia Fulford Dobson, Holly Thompson, Darcey Smith, Della Luke, Izzy Cotton, Georgie Pollard, Holly Cookson and cox Chloe Beeton put in an impressive performance to win the event easily.

Cameron Seager competing in boys’ J15 single sculls where he had an easy first round win but had to dig deep in the final to come from a length down to beat a sculler from Walbrook by two-and-a-half lengths in the final.

The masters E crew Julia Lock, Margaret Hall, Helen Knowles and Janet Mehers, had a bye to the final where they met the winners of the earlier round a masters F crew from Walbrook. Due to the different age categories the Walbrook crew were given a 10 second start advantage, but this did not deter the Henley crew who rowed through them and went on to win by a length.