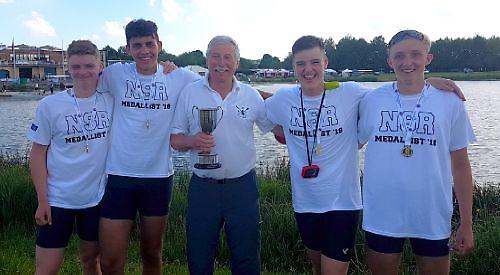 FOUR young rowers at Henley Rowing Club say it would be a dream come true to qualify for this year’s royal regatta next week.

Ed Roy, James Swinburn and Euan Turnell, who all live in the town, and Seth O’Connor, from Maidenhead, will attempt to qualify their quadruple scull for the Fawley Challenge Cup in Friday’s time trial.

The teenagers, who won gold at this year’s National Schools’ Regatta at Dorney Lake, are feeling confident, having all experienced victories at major regattas.

James, 16, who lives with his parents Martina and Jon in Western Road, is the stroke. He started rowing in the summer of 2014 when he was 12.

He said: “My mum suggested rowing but I didn’t want to go at first. One of my friends, Grant Taylor, said he would go with me.

“I was very against it as I just wanted to stay at home and play computer games all summer.

“I went to Henley Rowing Club’s week-long summer camp and absolutely loved it. My dad rowed at Cambridge and told me a few things to help me get better.”

James joined the club, starting at the J13 level, but the harsh winter in 2014 meant that all his races were called off.

The following year he won his first race at the Marlow Town Regatta in a quad with his friend Grant, Euan, Sam Beattie and cox Charles Washbourne.

They lost their second race at Maidenhead Regatta to Guildford Rowing Club but took their revenge in the final at Weybridge Ladies’ Regatta.

James said: “I think it’s great how all the kids compete from such a young age. You can’t start rowing when you’re too young because it’s not good for your back but it’s great from secondary school.

“It’s obviously nice to win but you have got to lose too.”

James was a keen hockey player but began to favour rowing due to the extra fitness he gained from the sport.

In March 2016 he was in a coxed quad that won at the Junior Sculling Regatta at Dorney with Grant, Euan and Alex Carr with Charles coxing again.

It was their first semi-national event and the win came as a big
surprise.

James recalled: “I remember being very excited and running around quite a lot afterwards as we didn’t expect to win. It was our first big race at that level.”

At the National Schools’ Regatta that year the same crew took silver.

“At that point we were extremely happy,” said James. “As we’d lost to Aberdeen, a Scottish crew, we could say we were one of the best in England.”

The same year the crew came second in the Junior Inter-Regional Regatta to Latymer School and then went on to win comfortably at the British Rowing Junior Championship in Nottingham.

James, who has just finished his GCSEs at Reading Blue Coat School in Sonning, confesses that 2017 wasn’t his best season after breaking his kneecap due to a recurring hockey injury.

This came just a few weeks before the Junior Inter-Regional Regatta and he had three months away from rowing to recover.

“When I was out I was so determined to get back fit,” he said. “I was constantly swimming at Henley leisure centre to keep my fitness up.

“It came to May and the National Schools’ Regatta, which was my first race back, and we ended winning that by two or three lengths.”

He also claimed third in the British Championships in a boat with Grant, Euan and Alex and cox Charles.

He made the Henley RC boat for the Fawley Challenge Cup qualifier but the crew was the fastest non-qualifier on the day.

This season James, Ed, Euan and Seth are the first choices — but only just.

James said: “We have had so much competition for the quad so we had seat trials. We have six, maybe seven, people who could all be in the boat.”

They dominated their event at the National Schools’ Regatta, beating Claires Court School in the final by 4.7 seconds.

James described this as “a great feeling”.

“The season has gone well so far,” he said. “We think we’re probably faster than last year’s trialling quad for Henley so hopefully we’ll qualify this year. We’re quite confident we can do well.

“Just to race at what is one of the biggest events in the world, apart from the world championships and Olympics, where we’re on home territory and in front of our home crowd, will be amazing.

“Racing at the same event as national teams and Olympic legends, it’s just fantastic to be a part of that.

“My dream is to be a GB rower but it has been a dream for a while to get to Henley Royal Regatta.”

Ed, 16, who lives in Thames Side with his mother Lucy and father Rob, began rowing in late 2015 at the age of 14. He started at Shiplake Vikings but soon decided to join Henley Rowing Club where his sister Florence, 17, and friend Hugo Rompani were members.

Ed, who attends Reading School, is 6ft 4in.

“I was almost too tall for other sports but it took a while to get used to rowing. My brain hadn’t caught up with my limbs so I was quite unco-ordinated.

“Most of the people had been rowing a year longer so I wasn’t great at the start but I really enjoyed the club, the people and the coaches and the atmosphere at rowing events.”

In 2016 he experienced his first major success, winning gold at the National Schools’ Regatta in the coxed B quadruple scull.

Ed said: “We didn’t really know how good we were so we were pretty happy.”

After doing more weights and core work to build his strength up, he saw a marked improvement in his ergo times in 2017 and then won gold at the National Schools in both the J16 coxless quad and in the J16 coxed B quad.

He also took silver in a double scull at the British Championships, losing to a Leander Club crew.

This year, as well as taking gold at the National Schools’ Regatta, he was in the coxless quadruple scull that that won the Schools’ Head of the River Race in Hammersmith in March. He also came second at the J16 Great Britain Junior trials in Boston, Lincolnshire, in February.

Ed is excited about the prospect of rowing at Henley Royal Regatta.

He said: “There’s only about 10 spaces left and we have beaten the times of some of the crews who have pre-qualified so I’m fairly confident. If we have a good row, we should get it.

“It’s something I’ve wanted since I started in the sport. I just love the environment because we always have crews stay at our house and I’ll walk around town and hear the foreign crews and it makes me feel like I’m on holiday. If there’s any place a rower should live, it’s probably here in Henley. Because of the home support, even if people don’t know us, as soon as they see it’s Henley, hopefully they’ll cheer for us.

“Every year my parents go to the regatta and they shout for crews but they don’t really know anyone, so I know they would quite like someone they could cheer for. I’m just excited to be honest. Because I take my rowing quite seriously I think I’m going to enjoy it more than ever this year.”

Ed hopes to win a scholarship to study in America and continue to row.

Euan, 16, who lives with his parents Helen and Philip in Greys Road, is in the bow seat.

He took up the sport three years ago after the family moved back to Britain from Sweden. His mother suggested it as she had rowed at university.

Euan said: “I thought I’d give it a go and see what happened. I joined Henley Rowing Club and started in the J13 section.

“It was a lot of dedication but I enjoyed it and it gave me a break from school work and something else to focus on. Now, because I’ve got such a good crew, a good squad and a very good coach, it makes it so much more fun.”

In 2016 he moved into the J14 section and experienced his first major race in a quadruple scull at the Junior Inter-Regional Regatta, coming second to Latymer School.

Euan said: “It was a big step up from what I’d done before but it was very enjoyable. It showed how well I could do and how far I could go.”

He was also in the coxed quad with James that came second in the National Schools’ Regatta that year.

Last season he made the club's J16 quad with Grant, Balthasar Issa and Oliver Taylor despite still being in the J15 section.

He won two golds at the National Schools’ Regatta — one with the J16 quad and the other with a J15 coxed quad.

“It was a really good achievement,” he said. “For the J16, we weren’t expecting to win.

“It kind of inspired me to want to become a rower and it gave me confidence as a person as well as a rower.”

This year he has a hip injury which means he can’t use an ergo but he can still row. He is having physiotherapy and massages to help him overcome the problem.

Euan, who has just finished his GCSEs at Gillotts School and plans to take A-levels at The Henley College, is also relishing the prospect of rowing at the royal regatta.

“I’m actually very excited,” he said. “I’m getting nervous as we get closer to the qualifier but I think we have a good chance.

“We did Marlow Regatta recently and beat a lot of the crews who have already pre-qualified.

“The atmosphere is always great at Henley but it’s also our home water. All of the regattas build up to Henley — for club events this is probably the biggest one.”

Euan’s older brother Bruce, 18, is in Henley RC’s A quad and also attempting to qualify for the Fawley Challenge Cup for the first time.

Euan said: “Our parents are extremely excited and really happy for both of us.

“Bruce and I support each other and also try to beat one another but we’ll be cheering each other on.”

On Sunday, the boys will attempt to earn a GB vest at the GB France time trial. The quickest crew will represent their country against France on July 12.