Talented rowing sisters are happiest back in Henley 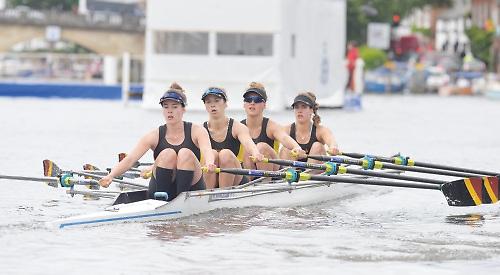 HATTIE, Lottie and Maddie Orr have a busy summer ahead of them.

Two of the sisters, who live in Checkendon, hope to compete in this year’s Henley Royal Regatta after putting themselves forward for Friday's qualifying races in two events.

Hattie, 20, will be vying for a place in the Princess Grace Challenge Cup as part of a University of London women’s quad while Lottie, who is two years younger, hopes to represent Henley Rowing Club in the Diamond Jubilee Challenge Cup for junior women’s quads.

The pair both took part in last weekend’s Henley Women’s Regatta, where Hattie reached the semi-final in a University of London quad while her sister was part of a victorious Henley junior quad.

After Henley, Hattie will compete for the university in an eight at her first ever European Universities championships in Coimbra, Portugal, alongside her twin sister Maddie, who is captain of women’s rowing at the University of Durham and represented it in an eight at the women’s regatta.

Meanwhile, Lottie, who has just finished her A-levels at The Abbey School in Reading, which both her sisters also attended, hopes to compete in the Junior World Championships in the Czech Republic on August 8.

She will then head off to America to study at the University of California, Berkeley, on a four-year rowing scholarship but hopes to return to take part in British Rowing’s under-23s trials.

Hattie, who took up rowing alongside Maddie when the pair attended an open day at Henley Rowing Club in 2013, has competed at Henley on three previous occasions. She rowed twice in the Diamond Jubilee, once in 2014 for Henley and again in 2016 for Shiplake Vikings, and last year in the Princess Grace for University of London, where her crew were knocked out in the opening race by the Dutch national squad.

She won the junior 16 quads at Henley Women’s Regatta in 2014 and reached the final of the junior 18 coxed fours the following year.

She made her debut for the University of London at the women’s regatta in 2017, where her quad was knocked out in the semi-finals.

Hattie, who is in the second year of an architecture degree at University College, London, said: “I haven’t been training with this crew for very long but things are going well and we’re seeing improvements.

“We tend to train in eights so haven’t done much sculling all year and, as a sculler, it’s nice to be back in a sculling boat for the summer. Our training is pretty flexible because everyone’s on different degree courses with varying hours so coaches give us a programme to work on in our own time. We only train together in the evenings and do our own stuff the rest of the time.

“It’s lovely to be back on a flat section of the Thames after spending so much time on the Tideway. This is by far my favourite stretch of the river and Henley women’s and royal regattas are probably the highlights of my year. There’s always a lovely atmosphere and I get to see the friends I made at junior level. It’s a bit odd because you’re also in competition with them but they’re now at universities all over the place and it’s hard to find any other time to see them.”

Lottie, who took up rowing shortly after her sisters because she saw how much they were enjoying it, said: “Our main aim is Henley Royal Regatta — the women’s regatta is great but it’s mostly a bit of practice down the course.

“This is definitely the best place to race because you don’t get the same atmosphere anywhere else. It’s much more fun racing one on one and you’re physically closer to the spectators, many of whom know you and are cheering you on.”

The girls say they were encouraged to be active from a young age by their mother Niki, who is head of physical education at the Abbey’s junior school and a keen rower herself.

Hattie said: “Mum’s probably the most active woman you could find so we did every sport imaginable like hockey, athletics, swimming and so on. We tried to continue hockey for a while but soon discovered that isn’t how it works — it’s rowing or nothing!”