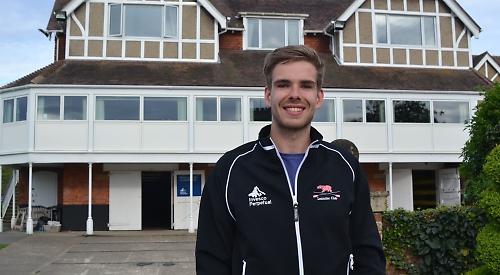 FINALS day at last year’s Henley Royal Regatta was a moment Harry Glenister will remember for the rest of his life.

After his victory in the Prince of Wales Challenge Cup on his birthday, the Leander Club rower became the first person in history to win all three quadruple scull events at the regatta — all by the age of 22.

In all, he has claimed four victories at Henley and has also graduated to the British rowing senior squad with his sights firmly set on competing at the 2020 Tokyo Olympics.

Glenister was only 14 when he took up rowing for “a bit of fun”.

He was a pupil at John Hampden Grammar School in High Wycombe when he spotted a leaflet from Marlow Rowing Club encouraging people to go and try the sport.

He recalls: “Me and a couple of friends went and gave it a go and all of us got through the initial stage.

“There was obviously a standard you had to be at but I didn’t think then that I was going to end up doing it full-time. I started once a week on a Saturday and slowly it started to consume my life.

“I was also playing football, tennis and cricket as well as swimming and, as the rowing got more and more intense, I started dropping those sports.”

As he trained more, Glenister found it helped with his GCSE studies.

He explains: “I would go and train and then I would revise and study for my exams. The rowing would give me a release from my revision.”

By the time he started studying for his A-levels, he was taking rowing “seriously” and training six days a week.

Glenister says: “I was initially in the B quad and a guy in the A quad got injured and that gave me an opportunity and I went for it.”

In 2012 he won silver at the National Schools’ Regatta and the same year Marlow RC reached the final of the Fawley Challenge Cup at Henley before losing to their local rivals, Sir William Borlase’s Grammar School. The defeat encouraged him to improve.

“In 2012 I was the fourth man in the quad and I wanted to change that and I had the momentum.

That summer the crew of Glenister, Josh Kent, Sholto Carnegie and Charlie Simon got their revenge on Borlase by winning the Fawley Challenge Cup.

“That was a massive race,” says Glenister. “We’d wanted to win it all year and I’m glad we came out on top. We definitely wanted to beat Borlase.”

The quad also won the Fours Head in London and the National Schools’ Regatta that year.

Glenister also enjoyed success at the Munich Junior International Regatta in the junior men’s quad with Kent, Carnegie and Seb Devereux, He also competed in the World Rowing Junior Championships in Trakai, Lithuania.

In 2014, he moved to Molesey Boat Club while studying business management at the University of Surrey.

“It was a shock to the system,” he recalls. “It was very different to Marlow.

“Everyone was a junior in the squad I was in at Marlow but now I was starting to row with 28-year-olds when I was still only 18.

“The training was so much harder. We did one session a day at Marlow, whether that was a 12km or 16km, and suddenly I was doing two 16kms or a 16km and weights while also trying to enjoy my first year at university.

“We had to get up 4am and get to Molesey for 5.30am for training and then I’d have lectures.

“I really struggled with the training in the first year — I was hanging on and my ergo scores were not great. I just wasn’t used to the mileage.”

Glenister didn’t make the
GB squad that year but a big change came when coach Franz Imfeld joined the club. He says: “He really helped me because he understood I was younger and he changed my programme to help me adapt to the new training.

“He was really supportive and a really good coach.”

His ergo times improved and he began to develop as an athlete.

Even so, he wasn’t invited to the final trials for Great Britain, which he says was “devastating”.

“My friends who I had been training with had been invited and it was a bit of a blow,” he recalls. “I wasn’t good enough that year.”

As Glenister moved into his second year at university his workload increased and, to make matters worse, he again failed to make the final trials for the GB squad.

However, he did win the Wyfold Challenge Cup at Henley, learning to sweep in the run-up to the event.

This victory helped him through a “dark” period.

He says: “I was over the moon to win the Wyfold and it was good for me to feel I wasn’t rubbish and that I could row.” Looking back now, he puts his feelings then down to immaturity. Glenister says: “I was young and I don’t think I dealt with high-pressure situations that well, which I have learnt to do with age. I’ve really matured.

“My goal is the same, though, which is to be in the GB rowing team and row at the Olympics.”

After his latest Henley victory, he joined Leander Club.

Glenister says: “I wanted to take my rowing to the next level. It was nothing to do with Molesey, where I’d had a really good time. Franz was a great coach and he developed my rowing in so many ways.”

After his second year at university, he took a year out to focus on his rowing.

In hindsight, he admits that giving up his studies wasn’t a wise move.

“I didn’t have a job or work experience or anything like that which was a bit silly,” he says.

“I just gave everything to rowing because it was so important to me at the time.”

“It was amazing because we put together three really good races so that showed consistency which sometimes I was lacking in past years,” says Glenister.

“We’d won against all the odds and that was when I really started to believe in myself.

“We were trying to prove we were good enough to go as the under-23 GB quad to the world championships.

“Having a lot of people debating whether we were good enough really motivated us and gave us something to fight for.”

The crew did go to the championships in Rotterdam and finished fifth.

However, Glenister says: “My goal had been to get to my first under-23 world championships, win Henley and establish myself as a strong athlete in the GB selectors’ eyes, which I did.

“They were the building blocks for the future I guess.”

He says the facilities, training programme and support at Leander have furthered his career but also credits his family — he lives with his parents Clive and Florence in Princes Risborough.

“I’m very lucky,” he says. “I have a very supportive family and they believe in me when others don’t and keep telling me, ‘you can do it’. They come to most of my big races.”

Last year, he was in the quadruple scull that finished fourth at the under-23 world championships in Bulgaria.

He then changed his training regime with the help of Hunter.

Glenister explains: “He made sure we did all the training at the right intensity.

“He taught me not to try to impress all the time but to do so when the big races are on.

“In previous years, I was fighting the whole time, which made me relentless in trying to win things, but when you’re at the top it’s a little bit more chilled.”

He still trained hard all year and was rewarded with his first appearance with the GB senior squad at the first world cup in Belgrade where he was in the quad that came fourth.

He also managed to finish his degree at the University of Surrey, graduating with a first class degree.

At Henley the Leander crew was put into the Prince of Wales Challenge Cup when an Italian crew pulled out.

Glenister was excited by the prospect of taking a record that had eluded so many before him — winning the Fawley, Queen Mother and Prince of Wales Challenge Cups.

The crew was expected to win as it had been due to compete in the Queen Mother.

Glenister explains: “The year before we were underdogs and weren’t expecting to get through each race and when we did we were really happy and celebrating each time.

“The difference with the Prince of Wales was we were there to win and were expected to win so anything else would have been disaster.”

The crew raced the Leander B crew in the final, winning by one-and-a-quarter lengths. Glenister says: “We had two boats in the final, so we had done really well as a club and it was really nice to do it with my close friends in that quad.

“It was amazing to be part of history and no one can take that away from me.

“My family have supported me throughout and to be able to give that back to them showed it wasn’t a waste of their time.”

This year Glenister has switched from sculling to sweep and is impressing in the men’s pair with fellow Leander athlete George Rossiter.

They came third in the GB trials in Boston in February and fifth at Caversham Lakes in April and they won the B final at the world cup in Belgrade in June.

Glenister says: “George has got the same mindset as me. I know he’s done all the training, how much effort he’s put in and how much he wants it.

“I believe in myself, I know how good I am and I really want to show it.

“To achieve what I have this season is amazing and for the amount of work I’ve put in for it to pay off is really nice.

“But a medal at the Olympics is the dream — that’s been the aim for the whole of my rowing career. I’m aiming for Tokyo 2020.

“It has been a bumpy ride and I’ve fallen so many times.

“I thought I’d cracked it and then I’ve had a massive loss but I’ve also had massive wins and I’ve always come back fighting.

“I can’t believe how it has played out. At school, rowing was just a fun thing for a bunch of us to do maybe once a week.

“ I could have easily missed that leaflet and my life would have been different.

“You have got to believe in yourself and not let what people say affect you.

“If you believe you’re good enough, you should go and take it.”