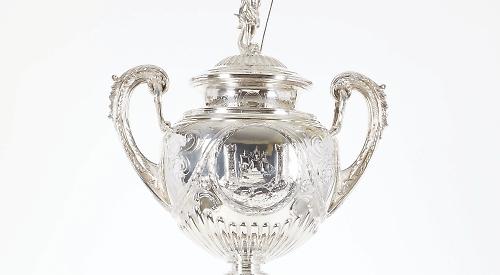 THE two Cork Cups not only dominate the trophy display cases at Leander, they are among the most splendid trophies to be found in any sport.

It was in 1902 that Cork decided to stage an International Exhibition. At the time Ireland was still part of the United Kingdom and as well as the exhibitions, which included an art gallery, machinery hall and industrial hall, there were to be high-profile sporting events, including a rowing regatta.

A prestigious event required a suitable trophy, so the first Cork Cup, which cost £250 (equivalent to £20,000 today) was commissioned.

Though provided by West & Sons, the Dublin goldsmiths, it was unlikely to have been made in Dublin as it is stamped with a London hallmark. The subscribers were rewarded by having their names engraved on the solid base of the trophy. One prominent signature is that of Henry Campbell-Bannerman, the leader of the Liberal Party and a staunch supporter of Irish Home Rule who was to become British Prime Minister three years later.

The ornate trophy was then presented by Lord O’Brien, the Lord Chief Justice of Ireland, in celebration of the coronation of Edward VII.

Thirteen eights were invited to take part in Cork, including three Oxbridge colleges, Berliner Ruderverein, Germany, and Leander, whose crew included Don Burnell at five and Gilchrist Maclagan at cox.

The race was considered by the Rowing Almanack to have been the most important rowing event to have ever taken place in Ireland and was the first time that Leander had ventured so far afield in a competition. Leander and Berlin came through the heats to meet in the final, where Leander triumphed by a margin of two lengths, according to official records, although film footage of the race line would appear to indicate a rather larger margin of victory. Perhaps the officials were caught up in the friendly atmosphere that pervaded the entire event...

In 2010 Leander staged an “Antique Silver Road Show”, where the guest of honour was Ian Pickford, the BBC antique silver expert, who singled out the 1902 Cork Cup for particular attention.

He said: “It is magnificent, with as much detail as possible thrown into one object, including dolphins and two-tailed mermaids — the amount of work is absolutely stunning.”

Because the Cork event was so well received another was held in 1903, attended by Edward VII and Princess Alexandra. Another public subscription raised a rather smaller sum of money for the rowing trophy, which was of slightly poorer quality.

Having won two trophies there was some disquiet expressed in Cork about Leander’s continued success, especially as then the winning crews were allowed to keep the trophies in perpetuity.

Accordingly, Leander commissioned a trophy the following year which would be given each year to the winning crew in the men’s eights at Cork Regatta, a welcome tradition that is continued to this day by the competition’s organisers.