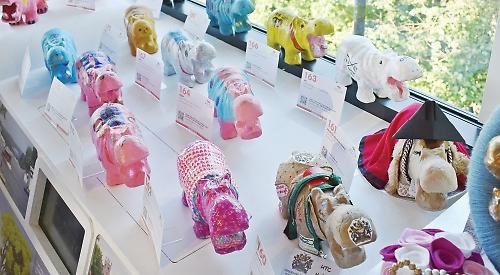 TWO hundred miniature hippos have been decorated to mark the bicentenary of Leander Club.

The hippo is the club’s symbol so it invited individuals, schools and businesses to customise the 18cm high papier-mâché figures for a community art project called Hip Hip Hooray.

People could paint, paper, dress, decorate or embellish them however they wanted and some of the resulting artworks are on show in shop windows around the town centre until the end of the month and there is a trail for visitors to follow.

Among the works of art is one by Linda Saul, a member of the Henley Arts and Crafts Guild, who draped her hippo in red, white and blue bunting while holding a sculling boat in its jaws.

She called the piece “King of the River”, which is how hippos are known in Africa and is said to be why Leander adopted the logo in the mid-1800s.

Pupils in year 6 at Valley Road Primary School in Henley gave their hippo a crown, beard and robes to look like Henry II in whose reign Henley’s first historical record was made.

A hippo dressed as a First World War soldier named Tommy was submitted by the Henley-on-Thames WWI Remembrance
Association. He has three poppies at his feet and is daubed with the slogan “Lest we forget, 1914-1919”.

It is decorated with gold and silver studs plus five miniature medals made from painted 1p coins and a red, white and blue ribbon with crossed silver oars.

The hippos will be reunited at Leander Club’s family day on July 22 before being returned to their creators or auctioned for charity. Each hippo has a label with a QR code, which can be scanned using a smartphone to find out more about it and place a bid.