How chairman Steve is helping the ‘new China’ 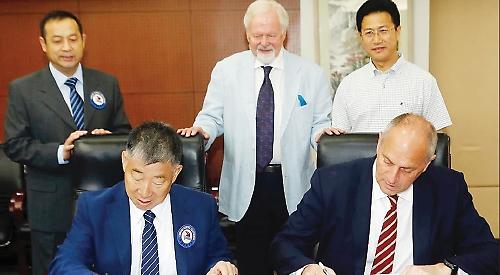 CHINA could become a major force in world rowing within six years, according to Sir Steve Redgrave.

The Henley Royal Regatta chairman and five-time Olympic champion was appointed high-
performance rowing director of the country’s national squad in May.

And he says he is looking forward to making his mark.

He will initially help put training programmes together but ultimately hopes to appoint top coaches from around the world and set up a teaching network to ensure they perform at the highest level.

China began competing internationally in 1988 and has won one gold medal, four silvers and four bronzes.

Sir Steve says this is an impressive achievement given the sport’s relatively low profile at national level — and a good starting point for future success.

Earlier this year, he was invited to visit China by Athole Still, his former manager, who had been in talks with the national squad and had generated some interest in him.

The squad, which had never had a high-performance director, met most the successful rower in Olympic history twice in Beijing before he accepted an offer in the final week of May. Sir Steve had only recently decided not to apply for the role of performance director at British Rowing as he didn’t feel he could improve on the squad’s impressive performances at recent Olympic Games, in particular London 2012, where Team GB’s medal haul was four golds, two silvers and three bronzes.

This summer he will accompany the Chinese squad to various competitions around Europe while offering guidance and encouragement.

He will balance this with his royal regatta duties but has had to resign as president of the rowing club in Marlow, his home town, as he would not have enough time
otherwise.

Sir Steve said that at first he told Mr Still that he couldn’t accept the China role as he had way too much on his plate but then changed his mind.

“I gave it some more thought and rang him back soon afterwards, saying I’d like to have a chat with them,” he said.

“I’ve got more than 40 years’ expertise, mostly at a high level, so they offered me an oversight role on their senior team with a little bit of involvement with the under-23s and juniors until the Paris Olympics in 2024.

“It has been a pretty quick turnaround and I’ve now got a pretty busy few months ahead of me but any season is only as good as the training you put into over the winter so I can’t make a significant difference until after the world championships in October.

“One of my fortés is taking the ‘visionary’ approach — coming up with strategies and programmes and looking at things in a slightly different way.

“At the moment, Chinese rowers compete for their own province and there’s no school, club or university rowing, which is what most of the entries to Henley Royal Regatta consist of, so they want to develop that.

“It’s part of the ‘new China’ whereby they’re gradually becoming a more Westernised, middle-class society, so from my perspective I’ve got a blank canvas.

“I hadn’t been back to Beijing since I visited the Games in 2008 and it was remarkable to see how many more upmarket brands were trading.

“They’re an economic powerhouse with so much potential and there’s obviously a large population to draw upon.  My brief is to put together a system of coach-to-coach support along with an awards system.

“It’s not going to be easy by any stretch of the imagination as their culture is very different from ours. Children in the West are brought up on the Olympics and dream of competing whereas it’s not such a big thing among their public.”

Sir Steve won his first gold as part of the GB coxed four at the 1984 Olympic Games in Los Angeles, then won gold in the coxless pairs in Seoul in 1998, Barcelona in 1992 and Atlanta in 1996.

He was then part of a coxless four that won gold at Sydney in 2000.

He also won gold at nine world championships, as well as two silvers and a bronze, and three gold medals at the 1986 Commonwealth Games.

He said: “One of the advantages is that I’m known and respected for what I’ve accomplished so when I explain what needs to be done they just lap it up —  for now, at least!

“It would have been difficult to get the British performance level any higher whereas the Chinese want to make a big impact in the sport.

“This is something I can really get my teeth into and it excites me a great deal.”