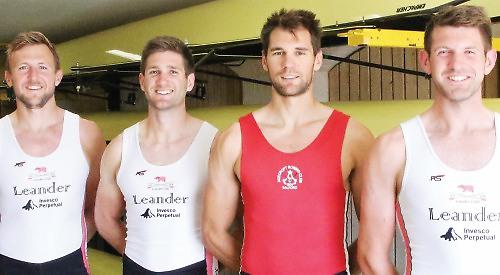 THE third and final regatta in the 2018 World Cup series sees a small GB squad of just 24 athletes in nine crews making their way to Lucerne, Switzerland, this weekend.

With the team’s focus on the European Championships in just three weeks’ time only the men’s and women’s quads have been sent to the Rotsee, along with the entire lightweight team.

Leander’s John Collins, Jonny Walton, and Tom Barras, with Graeme Thomas of Agecroft, come off the back of their win last Sunday in the Queen Mother Challenge Cup at Henley Royal Regatta. They kicked off their season with gold in Belgrade but finished a disappointing seventh three weeks later in Linz and will be looking to consolidate their strategy in preparation for the Europeans as well as the senior worlds next month.

The GB women’s quad, including Leander’s Jess Leyden, also won at Henley and will be looking to pick up more race experience in Lucerne. The recently-assembled crew was only put together in time for Linz, where they finished down the rankings, in marked contrast to the bronze medal won by two surviving members of the crew last year in Florida.

The GB lightweight crews are still in a state of flux but Emily Piggott of Wallingford is back in the women’s double with Emily Craig of UL after their bronze in Belgrade.

In the men’s events Jamie Copus of Oxford Brookes joins Agecroft’s Zak Lee-Green in the lightweight double, with Leander’s Sam Mottram racing his first international of the season in the single. Meanwhile, Natasha Harris-White, from Henley, has been selected to be part of the Great Britain rowing squad to compete in the World University Games in Shanghai, China, next month.

The former Gillotts School pupil and student at The Henley College now studies at Newcastle University, rows for Leander Club and trains six days a week.

She won the Redgrave Challenge Vase in the Championship Coxless Pairs with Laura Meridew at the Henley Women’s Regatta last month.