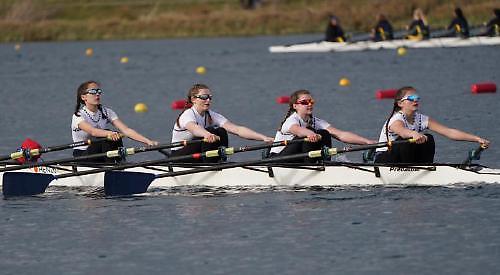 THE juniors of Henley Rowing Club headed to Dorney Lake on Monday for the junior sculling head.

The format for this event was slightly different than normal head races in that it is run in two legs using 1,900m of the 2,000m course with the time for each leg aggregated for a total time.

Winning four golds, two silvers and a bronze made the club the most successful at the event with the girls also picking up the Victor Ludorum while the boys finished runners-up overall.

The girls received two medals in the top event J18 quads where the A boat of Hannah Hills, Sophia Hahn, Daisy Bellamy and Georgia Brown picked up gold and the B boat of Izzie Bird, Emma Berry, Maddy Pollard and Phoebe Fletcher took bronze.

At J16 the girls won the silver behind Tideway Scullers. The J15 girls quad took fourth place by beating 62 other crews in the event with the largest entry.

The WJ14 girls have been training hard since September, for their biggest and final head race of the winter. The octuple scull was up against 34 other crews in their division with Henley finishing with a very respectable sixth place.

The quad of bow Lucy Jones, Ailish Harkin, Nonnie Luke, Eyla Wild and cox Fran Whittle, had one of their best rows of the season so far. In a field of 46, they powered their way over the course to win by a margin of 36 seconds, also placing them 36th overall.