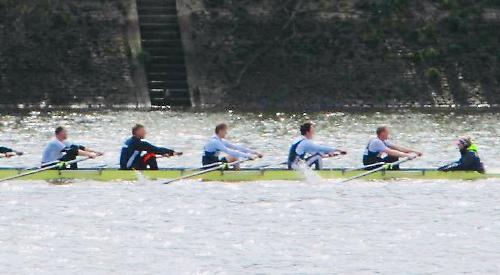 FOLLOWING the drama of Leander’s dead heat with Oxford Brookes at last year’s Head of the River Race, Leander were determined to retain the head outright last Saturday.

Leander boated three crews to race over the famous four-and-a-quarter mile course from Mortlake to Putney.

The top five crews started fast as they raced through the line at Chiswick Bridge, but it was only going through half way that the live results showed that Oxford Brookes had pulled away from Leander by a few seconds.

Leander were not able to turn this around in the second half of the race and this resulted in Oxford Brookes taking the honours with Leander having to settle for second place.

Meanwhile Upper Thames Rowing Club entered six crews in the head of the river races where they picked up a win on Sunday in the veteran H category.

On Saturday the club men’s crew finished a creditable 49th place. This crew will likely split into two fours for the remainder of the season now the focus changes from the time trial format to side-by-side racing.

By Sunday the benign conditions of the previous day had become anything but, and five masters crews took to water in near-sinking conditions.

The masters H crew led the way, winning their 70 year old average age group by an impressive 35 seconds over the rest of the field.

The crew included many ex-world champions and Henley winners who win on most occasions they compete. Not far behind their time of 22 minutes, 19 seconds were the C category women’s crew that turned in a good performance, narrowly missing out on a win themselves.

The women’s head of the river race that was cancelled the previous week saw the majority of the crew eligible for the masters version of the race on Sunday. Again, the crew included a number of ex-GB athletes and winners of Henley Women’s Regatta.

In other masters categories, Upper Thames entered C, D and E crews with an average age of 45, 50 and 55 respectively showing the club has increasing strength in depth at masters level.

The categories are handicapped, meaning the younger crews have to go faster than their older rivals in order to win comparatively and in this instance the D crew beat the C and E boats by five seconds each.