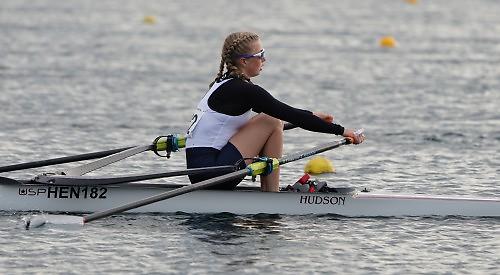 The Junior Inter Regional Regatta for which Henley Rowing Club had a number of crews selected to race was cancelled and the GB junior trials due to take place on Friday and Saturday were curtailed to a time trial on Friday only.

Fortunately the junior sculling regatta on Sunday took place with a full programme.

Friday saw seven of Henley Rowing Club’s junior boys and 11 girls compete at the GB rowing team junior trials at Dorney Lake — this was a record for both the boys and girls squads.

Good performances from the boys saw four of them in the top 12 with standout performances going to Ed Roy and Balthasar Issa who came second and third respectively.

The depth in the current girls’ squad was shown with nine finishing in the top 10 pairs with Issy Cotten and Emma Berry finishing fifth overall. As a result of a previous trial Balthasar Issa, Joe Long and Phoebe Snowden were selected to represent GB at the forthcoming international regatta which is being held in Munich this weekend.

On Sunday the younger girls and J15 to J18 boys not trialling were in action at the junior sculling regatta, also held at Dorney Lake, where all of them — bar the J15 4x+ — reached the A finals.

The J17 single final had Henley’s Euan Turnell, Sam Beattie and Grant Taylor competing with Turnell taking bronze and Taylor and Beattie finishing fourth and sixth respectively. A stand out performance from Cameron Seager saw him win the bronze medal in the J16 single event.

For the girls the J14 quad of Lucy Jones, Ailish Harkin, Nonnie Luke, Gabby Chaplin and cox Fran Whittle, won the morning time trial, and raced in the A final in the afternoon. Their performance won them gold and set a new course record.

The J14 octopule of Sophie Graham, Lilly Hoogenberg, Georgia Catlin, Hanna Boddy, Yazmin Lakatos, Karima Erbolat, Caitlin Swinburn, Eyla Wild, and cox Caitlin Emary came third in their time trial, getting them into the A final. They raced well, but were just pushed out of the medals coming fourth.

The WJ15 quad of Bea Bethnal, Ella McKay, Mia Roullier, Josie Sawbridge and cox Daisy Rolstone finished fourth in the time trial which saw them through to the A final but despite a good row were unable to achieve a medal spot again finishing in fourth place.

The WJ15 double scull of Laoise O’Donohue and Natalie Schoenmakers finished second in the time trial sandwiched between two Maidenhead crews. Despite perhaps not getting away from the start as sharply as might have been liked the Henley girls had a commanding lead by half way and won by a good margin of 19 seconds in a time that was just 0.17 seconds off the record.

The third gold for the girls crews came in the penultimate race late on Sunday evening when Mia Vickerman won WJ15 single sculls in a time that beat the old record by 42 seconds having overturned a two length deficit after 500m into a four length victory with a sensibly paced race.