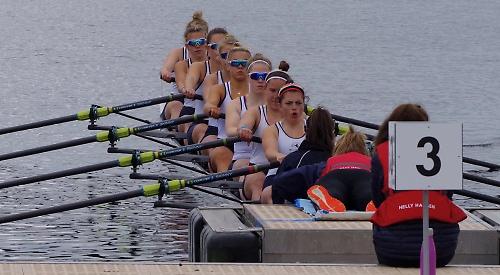 This was the first of the seasons major regattas with racing every six minutes from 7.30am to 7.30pm and split into two divisions with separate events morning and afternoon.

In the final Marlow RC moved out to a third-of-a-length lead early in the race but never managed to extend this over Henley. From 800m gone the crews were nip and tuck all the way up the course and going into the last 250 metres it was bow ball for bow ball Henley increased their rating to 38 Marlow upped theirs but could not match Henley who took the win by just over two seconds, all of which came in the last 100 metres

Lady Eleanor Holles School were first off the start pontoons and at 500m had a small lead over the two Henley crews. At 1,000m the Henley Ella Nolson crew had taken the lead and led LEH by nearly a length who in turn led the other Henley crew by a length with the other finalists trailing. This remained the status to the finish with Henley taking first and third places.

The Henley crew established a commanding lead early on in the final which they continued to build on finishing 10 seconds ahead of Marlow and 20 seconds ahead of third place South African Schools Rowing Union. Racing in the top women’s quad event, Holly Cookson, Daisy Butterworth, Sophia Hahn and Hannah Hills had a comfortable heat win and in the final took an early lead with clear water at 500 gone but a tight race between Tideway Scullers’ School and Shrewsbury School for second and third meant the Henley girls were never allowed to relax until they had crossed the line.

In the girls coxed four event Phoebe Fletcher, Millie Guida, Carla Russell, Maddy Pollard and cox Maddison Sturgess won their heat by 15 seconds. In the final Kingston had a good lengths lead by 500m but from there the Henley crew started to close the gap and going into the last 250 it looked as though they would pull through but in the end Kingston hung on to take a half-a-second victory.

For the boys James Swinburn, Ed Roy, Luke Marshall and Euan Turnell made the final of the top men’s quad event finishing a creditable second behind Leander and in front of Clair’s Court School. They then switched events and made the final of the schools quads with Leander again taking first, and in a battle for second and third Clair’s Court School just edged it with Henley third.

In the schools coxed fours James Wallace, Sam Beattie, Ollie Taylor and John Yolland with Charles Washbourne coxing had a tough first race but managed to reach the final but were unable to place.

Two of the coxed four, Ollie Taylor and Sam Beattie then switched from sweep to sculling and paired up with Grant Taylor and Hugo Overturf to make up the B quad in the schools quads and were successful in making the final alongside their teammates in the A quad and were in contention until the 1,500metre mark when Leander, Clair’s Court and the A quad moved away from them.

John Yolland and James Wallace rounded off the day in challenge double sculls by finishing a hard fought race third with the lead changing several times during their final.