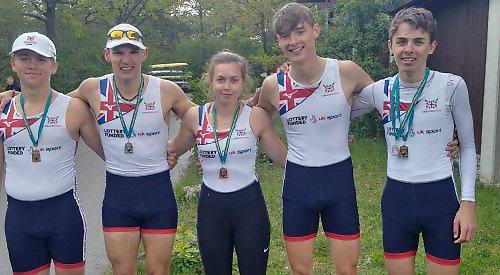 FIVE Shiplake College athletes were amongst the 33 competitors that represented Great Britain at the Munich International Junior Regatta last Saturday and Sunday.

In addition, Shiplake’s director of rowing Dave Currie was once again asked to be part of the GB coaching team.

A loyal band of parents and members of the Shiplake College Boat Club Supporters’ Association travelled to the Olympic Regatta Course to watch the British rowers compete on the international stage against participants from more than 10 other countries.

The racing was split over two days, and pupils from Shiplake College won medals on both. Sebastian Hjortland-Marks and cox Jacob Kirby took home the gold after an impressive performance in the junior men’s eight while Dominic Brown received a bronze medal in the coxless four. Olivia Morgan picked up a silver medal for her efforts in the junior women’s double sculls.

The College also dominated Sunday’s races, as Rhys Ash and for Brown, again coxed by Kirby, won the silver medal in the junior men’s eight. Later in the afternoon, Hjortland-Marks raced for a silver in the coxless junior men’s fours.

Speaking after the regatta Currie said: “This is a great international racing experience for the boys. A massive well done for our pupils for bringing home eight medals between them!”