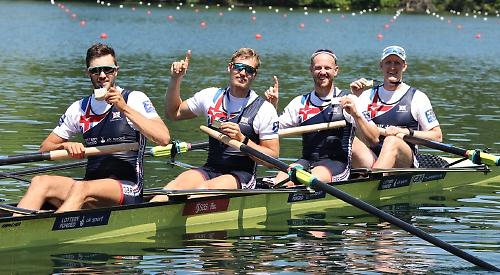 LEANDER athletes helped Great Britain win a gold medal, two silvers and a bronze on the final day of the European Rowing Championships on Sunday.

Leander had 28 athletes at the Lucerne event in Switzerland with 17 of them returning with medals made up of two gold, 11 silver and four bronze.

Despite only having trained together for a little over a week, the men’s four of Leander’s Matt Rossiter and Sholto Carnegie with Rory Gibbs and Ollie Cook won by clear water to take GB’s first European gold medal since 2017. The crew were the fastest qualifiers and continued their dominance in the final where they took the lead at the 1,000m mark. The men’s and women’s eights both claimed silver medals in the final two races of the day.

The women’s eights final saw an exhilarating race for the gold medal, with Leander’s Fiona Gammond, Josephine Wratten, Hattie Taylor, Rowan McKellar, Karen Bennett and Holly Norton along with Zoe Lee and Rebecca Shorten and cox Matilda Horn finishing six hundredths of a second behind Romania to take the silver for Great Britain.

Speaking after the race, Norton said: “We would have liked to have the cherry on top [with a gold], but as a team of athletes and coaches we’re building lots of momentum which is really powerful this early on in the season.”

The all Leander men’s GB quad of Jack Beaumont, Jonny Walton, Angus Groom and Pete Lambert gave it everything as they came away with a bronze medal.

Leander’s John Collins with Agecroft’s Graeme Thomas came away with an agonising fourth in the men’s double sculls in a final which saw the top four crews separated by less than a second.

Olympic silver medallist Vicky Thornley regained her powerful form in the women’s single sculls B final. She stayed cool and collected at the front of the field from start to finish, winning by two lengths. In the men’s single sculls B final, Tom Barras put in a similarly powerful performance, making his move at the 1,000m mark to overtake the home favourite and push through to first place.

In their A final, the women’s pair of Annie Withers and University of Bath’s Sam Courty gave it their all but had to settle for 6th place.

The lightweight men’s double of Will Fletcher and Agecroft’s Zac Green put up a strong fight in a close B final but finished up in fourth place.

In their B finals, the all Leander men’s pair of Harry Glenister and George Rossiter had a sprint to the line finishing in second place behind the Belgian pair and ahead of the Onfroy twins of France.