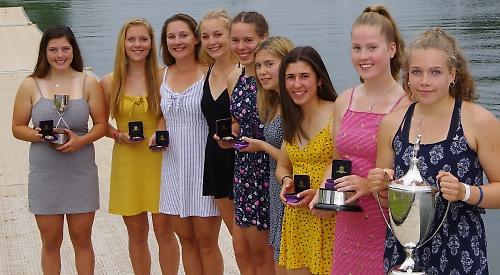 ELEVEN course records were broken and two equalled on Sunday at Henley Women’s Regatta in a string of high-quality, close finals.

The regatta ended with a classy performance by a Great Britain development boat, who beat Dutch crew DSRV Laga to take the Ron Needs Challenge Cup for championship eights in a course record-equalling time of four minutes and 36 seconds.

The race capped off an exciting three days of competition where Leander Club and Henley won two titles each while a sculler won a first ever title at the regatta for Shiplake College.

In their time trial the pair put down a strong marker to post the fastest time in their event. The quarter-final and semi-final all went to plan for the pair to set up the final with Cambridge UWBC in a race in which the Leander pair raced well from start to finish on the Berkshire station to win the title.

Having qualified from the time trials to the quarter-finals Maitland and Bryan raced well to beat Wallingford Rowing Club and then Winnipeg Rowing Club, from Canada, on their way to reaching the final where they put in their best performance to clinch the title.

Elsewhere Leander’s quad scull of Anna Porteous, Emily Carmichael, Emily Ashford and Laura Merridew raced well in the time trial but were beaten in the semi-finals by a strong GB U23 composite crew who went on to win the event containing Leander Club’s Zoe Adamson.

Leander’s championship four was a young crew containing U23 GB trialists Charlotte Fennell, Olivia Caesar, Juliet Perry and Rachel Heap. The crew came through the time trial but were beaten in the quarter-final by a US Naval Academy (USA).

Leander’s second championship pair of Issy Rundle and Katie King-Smith raced well in the time trial to qualify for the quarter-final before being beaten by Durham University.

Henley retained the the Nina Padwick Trophy for J16 quadruple sculls for a fourth successive year, beating Headington School by one-and-a-quarter length in a time of five minutes, 13 seconds in the final.

The crew of Georgie Pollard, Issy Cotten, Della Luke and Holly Cookson had to come from two lengths down in their first round heat after hitting the booms at the end of the island.

Henley also won the Groton School Challenge Cup for junior coxed fours, triumphing against a composite crew from Scotland by one length in five minutes and 29 seconds.

The crew of Maddy Pollard, Phoebe Snowden, Carla Russell Phoebe Fletcher and cox Ella Nolson, who after comfortable first and second round victories beat Kingston Rowing Club in the semi-final before beating the composite Glasgow Schools, Glasgow Academy and St Andrew’s in the final.

Elsewhere the Henley U16 coxed four of Holly Thompson, Poppy Wilson, Holly Nave, Emelia Fulford-Dobson and cox Ava Reineke finished 11th of the 21 crews but with the first eight progressing to the side by side racing.

The senior women’s double scull of Becci Norman and Natalie Atkinson drew the eventual winners in their first round heat.

Elsewhere student Olivia Morgan made school history as she became the first girl to win at the regatta representing Shiplake College.

The Year 13 student was racing in the Aspirational double sculls with her partner, Lauren Henry from Leicester Rowing Club. In addition to winning their final comfortably, they also broke the course record.