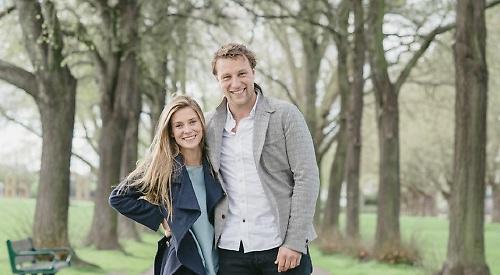 FORMER actor Oliver Coleman hopes his latest venture will be a star of this year’s Henley Royal Regatta.

The 36-year-old, who played paediatrician Dr Tom Kent in Casualty, is launching a new hospitality area at Remenham Court Field on the Berkshire bank of the Thames.

It will be called the Hidden Garden as it is tucked behind a hedge.

Mr Coleman quit the acting profession in 2014 to focus on event management, which he became involved in after working in the catering trade to support his early career.

He is married to actress Charlotte Salt, an actress he met on the set of Casualty when she was playing former army medic Dr Sam Nicholls and who still acts.

The couple, who have a two-year-old son called Leo, were married in July 2014 and then moved to Peppard from Putney.

They had initially looked to settle in Oxford but were put off by the property prices so expanded their search. They came upon their bungalow, which offered Ms Salt a chance to renovate it as it was in a poor condition.

The Hidden Garden features a raised platform near the river frontage which will allow guests to watch the racing.

Mr Coleman hopes this will encourage more people to support the competitors rather than socialising and missing the action, which he says many people tell him they do.

The 20m by 8m platform will provide views over a stretch of the river almost immediately upstream from the official Regatta Enclosure, just before the humpback bridge on the towpath.

The Hidden Garden has a capacity of 500 and will offer lounge seating and garden furniture on a first-come, first-served basis, although places must be booked in advance.

There will also be six tables for private dining with canapés and a two-course Mediterranean lunch. Each table will seat eight to 10 people who will be served shareable platters by caterer Spook London and be able to enjoy drinks until 3pm.

The enclosure, which can be covered in the event of rain, will be decorated in English and Mediterranean style designed by Ms Salt.

There will be a bar with a range of drinks and a “kitchen garden” which will sell pizzas from 4pm.

It will host performances by local musicians supplied by Henley agency Eight Ray.

It will be open from 11am to 11pm from Wednesday to Saturday and is open to private hire on finals day.

Mr Coleman says he wanted to provide a secluded area away from the “hustle and bustle” of the towpath, which becomes increasingly crowded over the regatta’s five days.

He continues: “The viewing platform offers great views over the river and will offer a sense of exclusivity while being inclusive in reality.

“We’re open to anyone who buys a ticket and the private dining could be booked by corporate clients or just families looking for a special day out.

“I chose Spook London as they’ve been going for about five years and I love what they’re doing — their canapés are beautifully fresh with lots of healthy crudites.

“Rather than serving lunch impersonally, it’s a family-style, shared event with big salad bowls and platters to be handed around.

“A waiter or waitress will look after you but you’re very much left to your own devices and don’t just have a plate put down in front of you then taken away afterwards.”

Mr Coleman has sold about half of the terrace tables and expects them all to sell out while general admission is still widely available.

He says: “This purpose of this year is mostly to get people in to see what we’re about.

“This is a new approach and from the reaction so far I think people are really looking forward to it.

“I don’t mind the pressure — I’m also very excited about looking after as many people as I can. It’s what keeps me going because there’s so much administration to deal with that I can’t wait to actually see the final result.

“I’d like to do more dining next year and continue encouraging people to come to Henley primarily for the rowing.

“People associate the regatta with the sport, of course, but so many visitors say they never actually manage to watch any races. I want to change that and make them a part of it.”

Mr Coleman is originally from Winchester and was educated at Bedales School, near Petersfield in Hampshire, before studying acting at the London Academy of Music and Dramatic Art. He had worked in bars and pubs since he was a teenager and began working for Last Supper, a London catering firm, while still studying drama.

He started out by pouring drinks at receptions before taking on more responsibilities at functions for clients, including Elton John and auctioneers Sotheby’s.

At the same time, his acting career flourished as he landed small roles in Ashes to Ashes and The Bill as well as his part in Casualty, which is filmed in Cardiff.

However, he lost his passion for the craft because of how quickly it had changed as technology evolved.

Mr Coleman explains: “Instagram and social media in general were getting more popular, as were streaming services like Netflix, and that’s how people were getting picked up.

“The traditional aspects I’d learned like theatre work or meeting casting directors were fading and it was harder to be perceived as being part of a serious profession.

“People could be cast for a project after being spotted in the street. They started looking for inexperienced people who would buy this dream of being an actor and they would basically hire
anyone.

“It’s sad because I knew some amazing people working in the industry but they were struggling.

“I had always had other passions so leaving was as much a lifestyle choice as a business one.”

He worked for Last Supper on and off for many years, doing less work while filming Casualty.

He also worked for Urban Caprice, another caterer, before spending almost three years as events manager for Lillingston in Notting Hill, where he regularly organised weddings and birthday parties with budgets upwards of £250,000.

He went solo after Leo was born in order to spend more time with his family and last year he organised the wedding of Arthur Guinness, of the Irish brewing dynasty, and fashion entrepreneur Hannah Weiland.

He initially traded under his own name but more recently rebranded as Naïve Productions. Mr Coleman says: “Last Supper taught me everything and are still the best caterer in London, if not the country.

“I learned about attention to detail, quality of food and making it look good even on a large scale and with large numbers of people.

“I learned about the importance of trust and looking after people. People are just looking for a good time and if you can have a chat with them and judge how they’re feeling at any moment then you’re doing well.

“Catering is the heartbeat of any event as it’s what everyone comes together around and if you don’t know how the kitchen works the whole thing is going to fall apart.

“I’ve always had my own ideas but was at Lillingston for a while before I felt my own dream needed to be pursued.

“My wife was back in Casualty and our son had just been born. She was just commuting to Cardiff and I was commuting to London and our poor son was getting pulled all over the place.”

Mr Coleman was visiting the regatta for the first time last year when he came up with the idea of his own enclosure.

He recalls: “I was aware of Henley’s high reputation but what I saw wasn’t quite what I had expected.

“I was hungry and was shocked that there was only a seafood restaurant in the Stewards’ Enclosure which served food in a canteen style.

“I wandered up the towpath but couldn’t find anything that quite fitted the bill.

“I didn’t go to Mahiki because I’m not 18 and although I quite liked the food area further downstream, I was stuck for somewhere I could grab a cold beer.

“My brain started ticking about how I might run things so I made enquiries and found my site.

“I had to wait until November before the landowner made their decision and I signed for it in January.

“I had always wanted my own venue like a restaurant or café and wanted to have a setting that I could design, run and produce like a film set.

“Charlotte and I had looked at cafés in Henley but the rates were too high and it wasn’t what I really wanted.

“I know the Hershams at Fawley Court on the other side of the river, who do private hospitality very well, and felt there was an opportunity to show Henley at its best.”

He was not afraid of going it alone.

Mr Coleman says: “I’ve been through a lot career-wise but 80 per cent of acting is rejection so I’m not afraid of taking risks.

“I knew what I wanted after I quit but I just needed the right opening and I’m confident that I’ve found it here.

“I love what I do and can’t wait to put that into action this summer.

“The size and scale for Henley isn’t too intimidating as I’ve done far larger events — it’s more the fact that it’s such a public event with many more things like security and health and safety to consider.

“I feel very lucky to be able to do this in the area where I live and want to continue building it over time.

“It’s a terrifying task but there’s huge potential and I was never going to turn down the opportunity.”

THE owners of a former pub in Hare Hatch have ... [more]