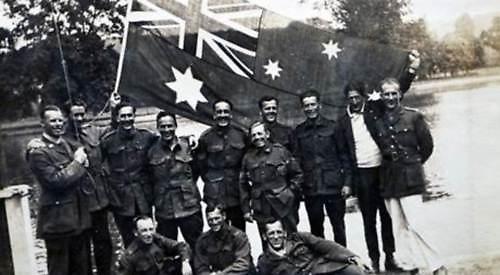 ROWERS from the Australian armed forces held a flag-raising ceremony in Henley to announce their arrival.

They are competing in the King’s Cup, which will take place during the final three days of Henley Royal Regatta to mark the centenary of the 1919 Peace Regatta.

It features mixed military crews from the original six nations of Australia, Canada, France, New Zealand, the UK and the USA, plus Germany and the Netherlands, competing in a knock-out format.

Wharfe House in Wharfe Lane, which overlooks the regatta finish line, was used as a training base by the original Australian crew for six weeks before the event 100 years ago, which they went on to win.

On Monday, their successors recreated a photograph of the victorious Aussies and then raised the flag as a symbolic gesture.

Scott Patterson, who is making a documentary about the original crew, called The Oarsmen, said most of the men from the Australian squad had seen action on the Western Front and some took part in the campaign against Turkish forces at Gallipoli. He said: “The house is where these guys were able to decompress, as no one was going to get hurt, and focus on a goal, which could only bring them together and distract them from the previous four years.

“They stayed at the house because it was big and they could all bunk in together. They sort of learnt to look after each other as a squad.” The two Australia crews met in the first heat of the King’s Cup and the slower was knocked out.

“Then they all came to rally round each other for the remainder of the competition,” says Patterson. “That is where sport and in particular rowing provided this great opportunity for them.

“There were loads of supporters and generals at the house following their victory. They all gathered here with General J J Talbot Hobbs and spent the night carousing.

“The story goes they didn’t know what to do with the cup. They were standing around half-pissed after drinking champagne. One of the officers ended up taking it to bed in case someone tried to steal it.

The King’s Cup is still competed for in the Australian men’s interstate eights competition. Brigadier Alison Creagh, CSC of the Australian Defence Force and the current squad’s team manager, said: “It’s an honour to walk in the footsteps of the Australian Imperial Forces who were here in 1919 and to race in their memory to mark the Henley Peace Regatta.”

Head coach Iain Smith said: “The significance of where we are at the moment is that the guys stayed here 100 years ago. We are following in their footsteps.

“It’s pretty humbling for our team that we are standing on the same steps after 100 years. It’s quite special and it’s amazing the records were kept and passed down.

“There’s a strong sense of history and the trophy that was won 100 years ago is a very significant trophy in Australian rowing.”

Captain Nicholas Waugh said: “We have been training for this event for about nine months. To come here now with the crew is an extremely proud moment and great honour.

“I look forward to going over the same course and bringing the cup home for another 100 years. Obviously they brought it back and to continue in that tradition would be a great honour.”