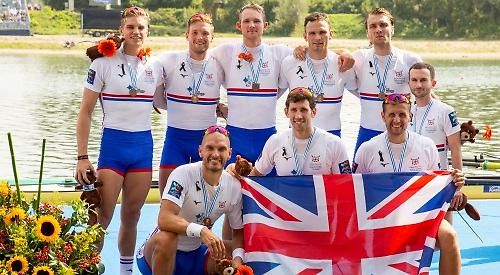 LEANDER CLUB athletes are on their way to Tokyo after 10 Great Britain boats qualified for next year’s Olympic Games.

The men’s eight rounded off the World Rowing Championships on Sunday with a bronze in Linz-Ottensheim, Austria.

Only the Netherlands matched Britain in terms of spots achieved in next year’s Games while Team GB also had three boats qualify for the Paralympic Games.

The crew, which is coached by Leander’s Jurgen Grobler, came home in five minutes and 22 seconds, fewer than three seconds behind the Germans and the Dutch in the silver medal position.

Fieldman said after the race: “Huge credit to the guys – everyone in our boat left everything out there. We wanted a higher result so it hurts a bit, but credit to the guys for delivering on everything we said. Well done to the Dutch and the Germans and we’ll be coming back with more next time.”

They came home for fifth in a relatively comfortable six minutes and six seconds but had to show resilience to hold off Romania in the final 500 metres and claim the final qualification spot.

Horn said: “We got the job done. It wasn’t our prettiest row but it was all about getting that qualification spot; next year will be the big one.”

Leander captain and Olympic silver medallist Vicky Thornley impressed in the single sculls with fourth place on the world stage, a slither off the podium. She now heads home from the championships as GB’s first single sculler to gain Olympic qualification for 20 years.

In an event which has seen heated A finals all season, Leander’s John Collins and Graeme just missed out on the medals in fourth place but are assured their place at the Olympics.

Director of Performance Brendan Purcell said: “Our goal coming out to this world championships was always Olympic qualification and the team has delivered.

“We have now qualified ten of our Olympic boats and to have both our eights heading to the Games is an important marker for a big rowing nation.

“I would like to thank Jurgen (Grobler) for his passion, commitment to the role and the challenge he provides to ensure we continue to look for ways to be the best.

“We now need to go away and prioritise our boats, focus on converting the opportunities into medals and look to seek additional qualifications. We have a lot of momentum to build on going into next season.”