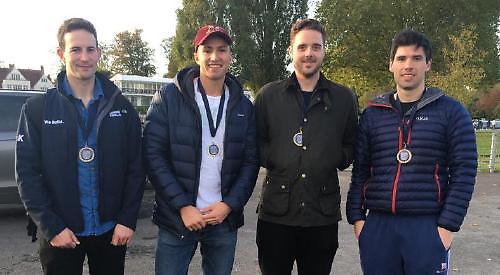 This year’s race attracted 349 entries which was 32 up on last year and the event was split into two divisions rowed in the morning and afternoon over the two mile upstream course from Marsh Lock to the Henley Royal Regatta enclosure.

In all, 1,059 competitors from 53 clubs entered across the 56 categories of events that the competition offers, including entries ranging from juniors as young as 14 years, seniors, with among them international rowers, to masters up to the age of 76.

The fastest crew of the day was Oxford Brookes University A, who took a time of nine minutes, three seconds to arrive at the finish and were awarded the Sutherland Bowl for this achievement.

Henley, who had 35 entries, triumphed in 12 events with their senior women quad of Emily Hillyard, Lucie Cave, Louisa Clarke and Rebecca Abbott having a strong rhythm throughout and a relatively smooth progress steering a good line and a lively tempo to win their event, while the senior women double of Beccy Norman and Liz Haskins overtook a couple of crews and had to swerve to avoid a capsized boat on their way to winning their event.

In the afternoon the stern three and cox of the eight were joined by Eyla Wild and had a convincing win in girls’ U15 quads beating many older boats and boys’ crews.

For the U14 girls the morning saw a small field of only Henley and one Abingdon boat in the WJ14 coxed quad sculls. Henley still sculled well against a strong stream to take the top three slots, with only 15 seconds between the first two boats.

In the afternoon division, they raced in doubles against a larger field of nine crews. The Henley girls came first, second third and sixth with the double of Freya Weiser and Tabitha Hall taking top spot with a time of 13 minutes and 47 seconds.

For the J14 boys squad this was the Henley crew’s first race of the season, as Ella Preswell, Albert Butler, Pascal Giret and Alfie Reineke with Monty French coxing raced hard and beat their opposition comfortably for a win.

There were no wins for the Henley masters crews but Margaret Hall and Janet Dutton came a third in their WMas EF2x event and then in the afternoon second in WMas EF 4x when joined by Helen Knowles and Julia Lock. The Mas CDE quad of Jeremy Sidgwick, Rob Berrington, Tom Skinner, Mike Hornsby finished fifth.

In the junior boys events the J15 double of Guy Hutchins and Matt Provoost with their first row together in a double took the honours with a determined performance and this was followed by a win for the J15 quad of Louis Swinburn Johnson, James Edwards, Ewan Sleep, Connor O’Shea with Kiran Drennan steering a good course as cox.

The J16 double of David Wallace and Jamie McLellan were up against Maidenhead who proved to be too strong for them and finished in second place. They then joined Elio DelLago and Zak Charles in the J16 coxless quad and damaged their boat trying to overtake another crew and finished second behind Maidenhead again.

Grant Taylor, fresh from his win in a quad for Henley at the Boston Head of the Charles race in USA, partnered Sam Beattie to win the J18 double sculls pennant by more than 45 seconds. The duo then teamed up with James Wallace and George Lauchlan in the afternoon and overtook two more senior crews to record another win in the J18 quads category. Another quad from Henley in the same category placed second. Upper Thames Rowing Club had 17 entries in the event and won eight events with two wins coming in the open coxless fours, four masters wins in the CDE eight, DE coxless fours, FGH coxless quads and CE pairs as well as triumphs in the open double sculls and a composite win with Tideway Scullers’ School in the women’s masters EF coxless quad sculls.

Sonning’s Reading Blue Coat School had 10 entries and gained success in both the J18 and J16s coxed fours. Elsewhere Shiplake Vikings had three entries with their best finish being third in the WJ16 coxless quads.