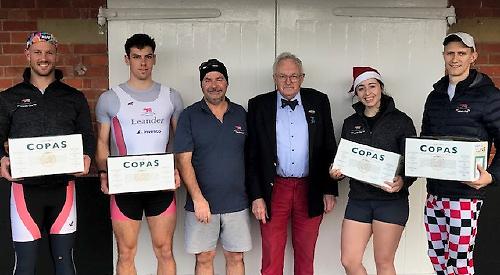 TRAINING at Leander traditionally finishes for the year with the turkey sculls fun Christmas racing where all the squads come together and row in quad sculls in mixed crews of men, women, seniors and juniors over a short 200 metre course.

This year the usual format had to be changed due to the very high river conditions. The turkey sculls took place on land as a relay using the ergos in teams of four with 10 teams participating.

The final was close with lots of power and honed team strategies of quick changes and high rating. The overall winners by 0.1 of a second was the team of Matt Rossiter, Luke Reiser, Katherine Maitland and Charles Waite-Roberts with a winning time of two minutes 50.06 seconds.

Each of the winning team were presented with a Copas free range turkey by Tom Copas, donated by the Copas partnership of Cookham. Mark Banks, Leander’s director of rowing and chief coach said: “It was a great event and all the athletes looked like they really enjoyed themselves.

“After a very successful year I wish all members and athletes a very happy Christmas.”