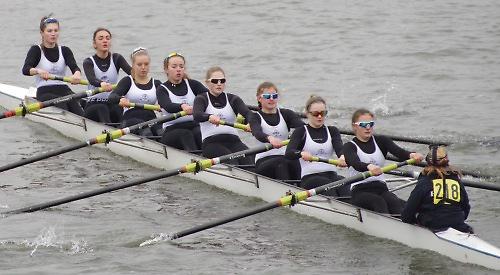 BOTH Henley Rowing Club and Shiplake College came away from last Saturday’s Quintin Head of the River Race with Victor Ludorum prizes for having the fastest combined times for girls and boys respectively.

Upper Thames also had success as they picked up a win in the masters category and narrowly missed out on a win in the open seniors event.

The Quintin Head was raced over 4,800 metres mostly on the Boat Race course starting just before Hammersmith Bridge and finishing 650 metres above Chiswick Bridge and like the Boat Race raced on the flood tide.

The start of the race was put back 15 minutes because the high quantity of land water flowing down the Thames delayed the expected tide turning time on the Tideway.

Henley, racing for the first time since October after the cancellation of events due to the high rainfall affecting both rivers and the adjacent river banks, entered four girls’ crews and one boys’ boat. The club’s small group of senior men, combined with several junior boys, formed an eight to compete in the open event. The crew of Sam Beattie, Ed Roy, Euan Turnell, Dom Brown, James Wallace, Marcus Brown, Joe Long, Grant Taylor and Charles Washbourn put together a fine performance, overtaking several crews, and finishing ninth overall. Their time placed them as the fastest club crew on the day.

Also finishing second in their category was the girls’ U15 eight of Abbie Artherton, Gabby Chaplin, Hannah Boddy, Georgia Catlin, Nonnie Luke, Ailish Harkin, Sophie Graham, Lucy Jones and cox Caitlin Emery. This was first time the crew had raced on the Tideway and they finished 33 seconds ahead of third placed Lady Eleanor Holles with Surbiton School taking first place.

Whilst none of the crews won their category the combined performance of the WJ18, WJ16 and WJ15s crews made Henley the fastest girls’ team and winners of the Quintin Hogg Memorial Prize for girls with an aggregate time of 50 minutes, 12.4 seconds along with a new top of the range Active Tools CoxOrb cox box.

Also competing was ex-Henley junior Georgie Robinson Ranger who was in the fastest women’s boat of the day racing for University of London.

Shiplake College got their season off to a fine start as they won four medals.

Shiplake College were awarded the Quintin Hogg Memorial Prize for boys with the best aggregate time of 45 minutes and 49.2 seconds as they also picked up a £600 coxbox.

David Currie, director of rowing at Shiplake College, said: “What a fantastic start to the season. It was great to get out and race in eights for the first time this season. We are looking forward to building towards the major national rowing events of the year.”

Upper Thames Rowing Club entered four eights with their first eight turning in a controlled performance that bodes well for the coming season. Coming off the back of the club’s training camp in Seville the crew finished second in the open senior category, agonisingly just missing out on the win by 0.3 seconds to Oxford University’s second crew, Isis. Their time of 14 minutes 26 seconds placed them 14th overall of 235 crews competing on the day.

Upper Thames’s women’s squad elected not to race at Quintin but concentrate on their water training in Henley now that the river level has dropped to a more manageable level.