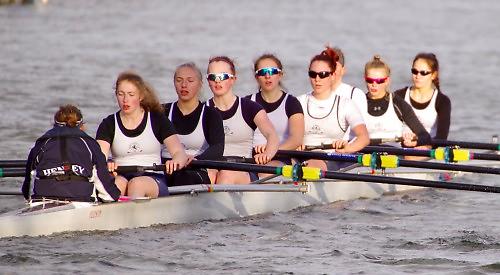 WITH almost 600 entries, the Hampton Head is a major event in the junior calendar which is rowed over a course of 3,000 metres starting just below Sunbury Lock and finishing upstream of Hampton Court.

Whilst last Saturday had some sunshine the fast stream and strong tail wind made conditions challenging for the crews taking part, it also led to the organisers withdrawing the U14 events.

Henley Rowing Club had 23 crews entered and of these six returned with wins and five others in bronze medal places.

The J15 girls competed in three quads in the morning and an eight in the afternoon division. With more than 50 entries including three crews from Henley this was the largest single category, and for all three crews to come in the top 10 was no mean feat.

In the afternoon the winning quad were joined by Gabby Chaplin, Georgia Catlin, Abbey Artherton and Hannah Boddy to compete in the eight where they finished third behind Wimbledon High School and Surbiton. In J16 girls’ coxless fours, Laoise O’Donohue, Ella McKay, Natalie Schoenmakers and Mia Vickerman notched up a four second win over Surbiton.

O’Donohue then changed from rowing to sweep and went up an age category when she joined Phoebe Snowden, Carla Russell, and Georgia Brown in junior quads to take an 11 second win over the fours head winners Tideway Scullers with Wallingford in third and Shiplake fourth.

Also winning one of the top events was the girls’ coxless four of Hannah Hills, Sophie Underwood, Della Luke and Carla Russell with another Henley crew pushing Surbiton High School into second place.