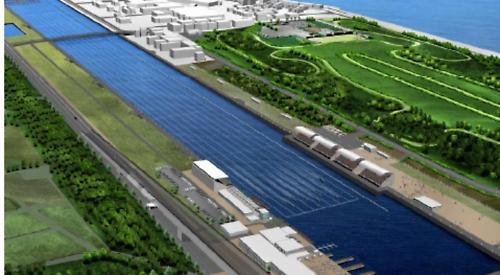 MORE than 50 people attended a talk at Leander Club about the venue for the Olympic regatta in Tokyo.

The 2,335m course is located between the inner and outer central breakwater canals in the port of Tokyo and each of the eight lanes is 12.5m wide.

Mr Treharne Jones, who visited during the junior world championships, opened the discussion with a reference to the coronavirus pandemic and how it could force the Olympics to be cancelled.

He said: “Konnichiwa [hello], we’re going to assume during the next 45 minutes that everything is going to carry on as usual but there are serious question marks about what’s going to happen.”

The commentator, who covers events for World Rowing, joked that the Tokyo Olympics logo had an unfortunate resemblance to the coronavirus.

He showed the audience slides of the waterway and explained how the course is built on an island in the middle of Tokyo Bay, which was originally created as a rubbish tip.

It lies beneath the flight path of Haneda International Airport and Mr Treharne Jones said the noise of the aircraft would be compounded by traffic.

Mr Loveday, who coaches juniors at Leander Club, also visited the waterway during the junior championships.

He explained how the athletes had to contend with 30 degree heat and 80 per cent humidity alongside the noise from the aircraft.

“The temperature and heat in the summer is extreme,” he said. “It can get quite uncomfortable.

“The immediate physical reaction to the level of heat is that the body tries to cool down. Your heart rate will go through the roof and you’ll sweat a lot. The heat isn’t such a big issue, though. You can adapt to it pretty quickly.”

Mr Loveday explained how salt water can crystallise on the boats, which reduces their speed through the water.

He said: “My advice is clean the boat, blades and riggers regularly. Otherwise it could have a detrimental effect. The salt water does also create extra buoyancy in the boat.”

He revealed that flying fish can land in a boat but races are not stopped if this happens. “It’s a great photo opportunity but if you’re our junior women’s double and a fish lands in your lap in the middle of the race you can hear the screams all the way down the course,” he said.

Mrs Kennedy, a cox who was part of the winning para four at the world championships in Bulgaria in 2018 and Austria in 2019, visited the waterway in October as part of an orientation event for athletes.

She said it was near the centre of Tokyo so was “part of the main action at the Olympics” but because the city is so densely populated, the athletes would be sharing very small rooms.

“We’ve been warned that we we’ll be getting to know each other well because we’ll be in 2m by 3m rooms,” she said. “I’m not too sure how this is going to work.”

Mr Treharne Jones explained how cameras operated by the media could not be taken into rooms with air conditioning otherwise they would fog up once they were taken back outside.

He also thought spectators would enjoy Japanese culture in between events and recalled exploring Tokyo’s famous gaming halls, where people can play a variety of video games.

“The Japanese are always keen to put on a show,” he said. “They want to engage with visitors and show off their country and give people a good experience.

“Of course, there’s also the bowing. For us Brits the bowing is a nice little habit. Everyone will bow — friends bow to each other. It’s a lovely habit to get into.”

He also joked about the toilets in Japan, which have a range of features such as heating in the seats. “Press the buttons at random and stand by to be surprised,” he said. “Hopefully you don’t flood the bathroom while you’re doing it.”

On Saturday, Japan’s Prime Minister Shinzo Abe said the Olympics would go ahead despite concerns about the spread of the coronavirus but added that the International Olympic Committee would make the final decision.

The Games are expected to cost the equivalent of £10.26 billion.