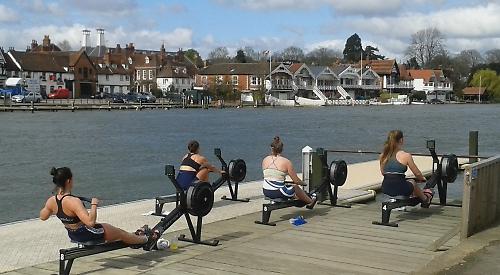 LEANDER CLUB athletes were left disappointed but not surprised after the decision was made to postpone the Tokyo 2020 Olympic and Paralympic Games until next year due to the worldwide coronavirus pandemic.

Canada had already said they would not be entering this year’s games while Australia and Great Britain were both considering pulling out of the event when the decision was finally made on Tuesday.

Japan’s prime minister Shinzo Abe said: “I proposed to postpone for a year and [IOC] president Thomas Bach responded with 100 per cent agreement.”

In a joint statement, the organisers of Tokyo 2020 and the IOC said: “The unprecedented and unpredictable spread of the outbreak has seen the situation in the rest of the world deteriorating.

“On Monday, the director general of the World Health Organization, Tedros Adhanom Ghebreyesus, said that the Covid-19 pandemic is ‘accelerating’.

“There are more than 375,000 cases now recorded worldwide and in nearly every country, and their number is growing by the hour.

“In the present circumstances and based on the information provided by the WHO today (Tuesday) the IOC president and the prime minister of Japan have concluded that the Games of the XXXII Olympiad in Tokyo must be rescheduled to a date beyond 2020 but not later than summer 2021, to safeguard the health of the athletes, everybody involved in the Olympic Games and the international community.”

Leander’s head coach Mark Banks said he was pleased that a decision had been made sooner rather than later. Speaking after the announcement was made Banks said: “Athletes will on the one hand be bitterly disappointed but not surprised by this announcement as training had become virtually impossible.

“The most important thing is that a decision was made sooner rather than later so athletes don’t have to risk their health by training for an event that was never going to happen. In fact I heard Sir Matthew Pinsent make the same point on Sky TV that the IOC had to put athletes first above profit.

“Worryingly they said it may be scaled back and it would have been interesting to have had some clarity on that point.

“Most athletes are used to training within a routine and everyone is in the same boat so once they regroup they will be training as hard as ever.”

Leander athlete Karen Bennett, who won Olympic silver in the women’s eight for GB at the 2016 Rio de Janeiro Olympics added: “Obviously I’m gutted that it’s going to be postponed, but I definitely think it’s the right decision.

“With everything going on in the world the Olympics isn’t the priority, it’s everyone’s health. Now we know exactly what’s happening we can plan and move forward with that.”

Just hours after the decision was announced British Rowing put out a statement saying: “We very much welcome the decision from the International Olympic Committee (IOC) to postpone and are grateful to have certainty around the status of the Games.

“We are now able to start planning how we best support our athletes, coaches and all our programme staff throughout this time, both within British Rowing and as a wider group of Olympic and Paralympic sports in the UK.

“In these uncertain times, Tokyo 2020 will be a fantastic event for our rowers and for sports fans around the world to look forward to.”

Leander athletes have had their season severely disrupted already this year with many events being called off due to weather conditions while rowing’s international calendar has been hugely impacted already by the coronavirus outbreak.

Likewise, the GB Rowing Team will no longer be travelling to their planned international training camps.