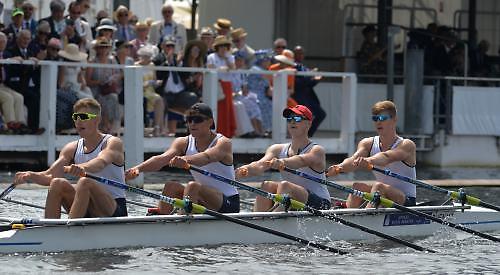 ROWING clubs in Henley have seen their income slashed as a result of the coronavirus pandemic.

But the cancellation of events such as Henley Royal Regatta, which was due to start on Wednesday, has caused a funding shortfall.

Some clubs will have to dip into their reserves while their members could also be asked to contribute more.

All rowing was stopped in March when the Government introduced lockdown restrictions in a bid to prevent the spread of covid-19.

Then last month British Rowing said athletes could have a recreational row in a single scull or with another member of the same household.

Leander was closed for three months with no income from its corporate and member facilities, bedrooms, dining room and bar.

Paul Budd, the club’s outgoing general manager, said the club had used the Government’s furlough scheme. He said: “We have certainly lost a lot of summer income due to the loss of Henley Royal Regatta but we have been able to mitigate some of our costs thanks to the very generous government furlough scheme, which has been very helpful.

“This year we will have to dip into our reserves but happily we have got good reserves."

Mr Budd, who ran the club for 12 years until this month, says it will have to adapt and find new ways to generate income once the virus has fizzled out.

He said: “The biggest change to how we operate will be social distancing and we will do all we can to make sure members feel safe coming to the club.

“The club will be affected in a similar way to that of a recession. The pattern of corporate activity will be different. We will need new ways of bringing in members to continue to feed the sort of rowing that allows these youngsters to pursue their Olympic dreams.

“The club will be different but it has been different before. The club has to move and it will move because there is the will there for it to happen.”

Mark Banks, Leander’s director of rowing, said the club would be able to cope in the short-term but might need financial help if the disruption went on for longer.

He said: “We have 3,500 members and most of them are members who use the club as a base at Henley Royal Regatta, to socialise with other members and to contribute to the rowing programme.

“Our athletes make up almost two-thirds of the Olympic team and the members are incredibly proud of that. Depending on how long this goes on for, we may have to go to those members to help fund us.”

Upper Thames RC has missed out on fees from visiting crews in the run up to Henley Women’s and the royal regatta and also rent for a field it owns near the course.

Chairman Justin Sutherland said that while the club had lost a large chunk of income, it had a healthy bank balance.

He said: “We will be down £50,000 in income this year due to the loss of the summer events but hopefully there will be little knock-on effect because we have been running a fairly tight ship over the last 10 years.

“This has allowed us to build up our savings to the extent that we can weather a short-term storm.

“Of course we are disappointed that we have lost that income and would like to get it back but 10 years ago we were about £250,000 in debt and now we are in a similar position in credit and that came after 10 years of strict financial control.

“We have been buying second-hand boats and doing them up and we have won Henley in two second-hand boats previously and it shows that you don’t need new everything. If you are frugal you can build up new reserves.

“The real problem will be how long the social distancing restrictions stay in place and what impact that will have on future gatherings at the club and events we want to take part in.”

Mr Sutherland added that despite the effects of covid-19, the club’s subscription fees were unlikely to be increased this year, maintaining a tradition dating back to 2014.

“We’re pleased because I feel it offers value for money,” he said.

Henley Rowing Club, which has a large junior section, has missed out on fees from visiting crews, parking income and having to cancel its learning to row courses.

Helen Turnell, who has chaired the club for 18 months, said: “The membership fee keeps the club ticking over but for things like buying boats and other changes, such as the building, that’s what we need extra income for.

“The virus has been a huge hit to our pockets and who knows what’s going to happen next year.”

Mrs Turnell, of Greys Road, Henley, said the virus could have a long-term impact on the club’s performances on the water.

She said: “If we don’t have our learn to row courses, that would mean we don’t have people feeding into our younger age groups and could potentially affect us for six years, which could have a more longer term impact and our income would be hit again.

“We do have a bar area but it’s not really used on a commercial level, certainly not to the extent of Leander Club or Upper Thames, and we have no reserves as we are a not-for-profit organisation.”

Mrs Turnell praised the club’s “fantastic” members and says she is confident its future is secure.

She said: “Our members have been very supportive and they really feel that it is their club and want to support it even though they are not currently getting what they want out of it.

“I am confident that next season we will still have a lot of members and we are all pulling together because we are not a commercial organisation and it has been great to see that.”