Retirement for man who led Leander to excellence off the water 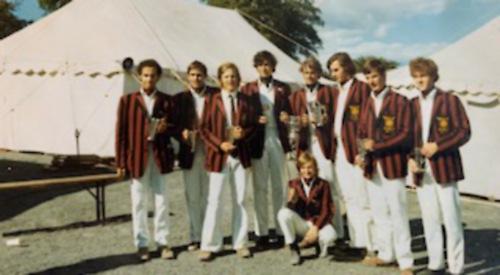 THE general manager of Leander Club in Henley has retired after 12 years.

Paul Budd, 66, told the club’s management committee in January last year that he wanted to retire after the Tokyo Olympics this
summer.

But with the club closed and all local and international rowing events cancelled or suspended due to the coronavirus pandemic, he will not now be returning to the role.

He has been replaced by Alastair Heathcote, who comes from Soho House in London and was in the Great Britain eight that won silver at the Beijing Olympics in 2008.

Mr Budd said: “My first impressions of Leander Club were summed up under three headings: professional, challenging and friendly.

“Looking back now over my
12-year tenure as general manager, I think these first impressions have stood the test of time admirably. I have always sensed within the club an underlying drive to achieve the best for our athletes and members.

“In 2011, we crystallised this sense of purpose as ‘striving for excellence on and off the water’.

“Our results on the water reflect professionalism from our coaches, athletes and the rowing management group that it would be difficult to argue against.

“I would like to think the same professionalism remains true of our front of house team that I managed.”

Mr Budd was born in London and went to University College School, for whom he competed at Henley Royal Regatta for three years from 1971 to 1973.

It was as a schoolboy that he first visited Leander when his coach took his charges to the club for a glass of port the night before the regatta began.

Mr Budd started at catering college in 1973 and rowed for Thames Rowing Club, again competing at Henley from 1974 to 1976.

He recalled: “I competed in Henley as a schoolboy and for Thames Rowing Club but I think it’s fair to say with a lack of distinction.

“One always wanted to get through to the Saturday because the earlier you got knocked out the more expensive the bar bill was.

“I was never in a crew that went to Henley and was expected to win, although we did have a very good school eight and in 1971 we went on to win at the Home Counties International in Scotland.

“In 1972 I was in a coxed four which won the junior event at the National Championships and then represented Great Britain at the Junior World Championships in Milan later that year but we didn’t do particularly well.

“My excuse is that in those days there wasn’t enough time between the two events so if you went all-out at national schools, as you would because you wanted to win, you didn’t have enough time to build to your next peak.

“So my rowing career peaked when I was 18 and it was downhill from there.”

After school Mr Budd was invited to join Leander but he declined because he wanted to join the army. He went to Sandhurst in the autumn of 1976, aged 22.

He stayed with the army for just over 30 years, primarily as a military food specialist, and reached the rank of colonel. He also rowed for the army in the early Eighties.

Mr Budd said: “The plan was to do three years and go back into the family catering business in London, which served pubs and restaurants but I couldn’t find the forms to leave.

“I did a lot of service in the UK but was also based in Germany and did a lot of supporting operations in Bosnia, Kosovo, Sierra Leone, Oman and in the build-up to the Gulf War.”

In 2000 he was appointed an Officer of the Order of the British Empire for these efforts.

He sent in his CV to Leander Club but there was no job available.

However, he was made secretary of the Special Forces Club, a private members’ club in London for those who have served or are serving in organisations and units closely associated with special operations and the intelligence community.

Mr Budd said: “The people who worked there knew I was looking for a club to run as all the clubs in London knew each other and I was approached.

“I said to them that I didn’t know anything about it and they said ‘good’ and that I was not supposed to. They liked to be off the radar.

“Working there wasn’t a steep learning curve because I knew about hospitality and catering, accounts and people. My military skills were very transferable into the civilian sector.

“Part of the reason why I moved on was that I wanted to prove to myself that I could be a successful caterer outside the army.”

After two years running the forces club, Leander contacted him via a head hunter to see if he would be interested in becoming its general manager but at first he wasn’t sure as he didn’t feel he had done long enough where he was.

Mr Budd recalled: “She asked me whether it was a question of loyalty and I suppose it was. She then replied saying that if the club wanted loyalty, they should buy a dog.”

He went to Leander for a meeting and was later offered the job. He started work during the Beijing Olympics.

“I realised that Leander was the ideal job,” said Mr Budd. “I had a rowing background and it was a much more demanding job than the Special Forces Club. I knew I would outgrow that so I couldn’t have wished for a better job than Leander.

“I went and chatted with the chairman and put my CV in about a week later. I made the shortlist, was interviewed and was appointed in the July, arriving in the August. I actually felt rather guilty about leaving the forces club early, as it was just under two years, but a job like Leander doesn’t come up every day.

“When I left I gave them a small plaque to put by the coat pegs, which said to please leave their coats and daggers there.”

Part of Mr Budd’s job at Leander was to maintain the level of visits to the club while maintaining its exclusivity to members.

He said: “There will always be corporates allowed in the club but it shouldn’t dominate the members, who want it to be kept exclusive. It is a balancing act.

“The primary role of the general manager is to make sure that the director of rowing has the necessary funds to help those youngsters and that is a wonderful thing to be engaged with.

“Businesses like coming to Leander because the club is all about success — it oozes performance in every corner and is inspiring. They want to use our facilities because they like that atmosphere and feel that they are also helping the athletes by being there.

“I, like the staff at the club, get a wonderful feeling that you are looking after these athletes while they are with you and it is something worthwhile.”

Mr Budd has overseen improvements at the club, including the redesign of the bar area, the revamp of the dining room to meet modern expectations and expanding the women’s changing rooms.

He said: “The club is in a good state of repair from top to bottom and in good decorative order but it is a team thing.

“About 12 committee members sit around the table and come up with some wonderful ideas and I put them into place.

“It is the collective wisdom of the committee as well as the staff, some of whom have been at the club longer than I have, working together that delivers. I have worked alongside so many talented, caring people and I will miss them most of all.”

He said: “You are looking at 6,500 calories a day for athletes and providing a different level of catering for the members. There is bulk catering at one end and then fine dining at the other and that is a unique challenge.

“There is also a lot more emphasis now on things like allergens and preferences. Ten or 12 years ago someone might say they were vegetarian or had a nut allergy but now we have a much higher percentage of people who have strict diets.

“About 15 per cent of people having the standard menu want variations, so what we provide is much more tailored and that’s the real challenge.”

Mr Budd said he felt privileged to have been part of the club during a “purple patch” when its athletes were bringing home lots of Olympic medals.

He said: “Since 2000 Leander really has been on the top of its rowing game and to be able to reflect on all the successes on the water from land has been tremendous.

“Henley is also a really supportive town, whether it is at the town hall, the Henley Standard or the local businesses that bring another dimension, and shows Henley is proud of its rowing history and what Leander has done.

“To be on the bottom of the bus during the Heroes’ Return and to see the depth of the crowd is extraordinary. I have done three of those. I think that is one of the most memorable things I shall take away with me.”

Mr Budd, who lives in a village near Salisbury with wife Brigid, a retired school teacher, said one of his few regrets is “sailing off into the sunset with the club closed”.

He said: “There are a lot of people I would like to say goodbye to that I am not able to at the moment but I will.

“I am still a member and I’m not going to give that up. I will be giving my successor a lot of breathing space. I don’t want to go back too early and be asked whether someone can book a bedroom.”