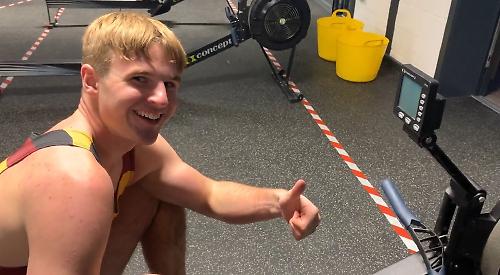 A SPORTING initiative has been launched by Shiplake College to help young people learn about the importance of good mental health.

The independent school has teamed up with the Charlie Waller Trust for Rowvember, which aims to raise awareness of the role that rowing can play in boosting physical and mental wellbeing.

It challenges pupils, staff and parents as well as those from other schools and members of rowing clubs to row 250m. In return they are asked to donate £2.50 or more via the college’s JustGiving page.

The initiative was launched at an online school assembly, where Dick Moore, an associate trainer at the trust, talked about his heartache after his son Barney took his own life because of poor mental health.

Now he gives talks in schools and workplaces about nurturing the mental and emotional health of children and young people.

Mr Moore said: “I became an instructor for mental health first aid and I joined up with the Charlie Waller Trust. Charlie, like Barney, was a privileged and successful young man but in 1998 he too became deeply depressed, didn’t confide in anyone and also ended up taking his own life.

“I really can’t tell you how enormously grateful the trust is to Shiplake College for all the work it is doing in support of the trust and its work in helping young people struggling with their mental health.”

Mr Moore finished his talk by asking pupils to talk to someone when they were next feeling down, lonely, fed up or overwhelmed.

Headmaster Tyrone Howe said: “More than ever before, our pupils are being challenged by uncertainty and insecurity and it is vital that we maintain our positive attitude and hopes for the future and try to turn challenge into opportunity.

“I am a big believer that physical wellbeing has an enormous benefit for our mental state. As an elite rowing school, we want to use our particular strengths to help others and also have fun and connect as a school community. I invite everyone in schools and rowing clubs to join us in raising money for this worthy cause. It’s only 250m, which means that anyone and everyone with access to an ergo can take part.

“Our aim is for every pupil and member of staff to take part and as many other people as possible, including parents, Old Vikings and local residents.”

So far almost half the pupils have completed the row, with the fastest time set at 39 seconds by captain of boats Dan Hallsworth.

To take part, take a selfie
showing your time and email it to rowvember@shiplake.org.uk