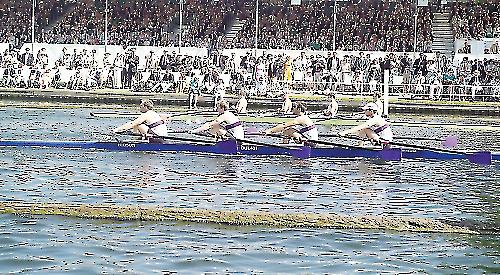 THIS year’s Henley Royal Regatta has been postponed due to the coronavirus pandemic.

Organisers felt it would not be possible to go ahead with the six-day rowing event on the intended dates of June 29 to July 4.

Instead, they intend to delay the regatta until August, which they hope will give sufficient time for the event to go ahead. It may also go ahead at Dorney Lake in Buckinghamshire instead of Henley, subject to regulations.

Last year, the regatta was cancelled for the first time outside of war in its 181-year history.

Sir Steve Redgrave, chairman of the committee of management, said: “Despite the positive news about vaccine rollout, it clearly remains an extremely challenging time for society, and as a result, our sport.

“Against this backdrop, and after much deliberation, we have reluctantly concluded that the 2021 Regatta cannot now be held at Henley from June 29 to July 4 as originally planned.  However, the committee has decided against outright cancellation at this stage and is instead exploring the potential to stage the Regatta in August – in Henley should conditions allow – or if not, at Dorney Lake.

“The timing of the easing of current lockdown restrictions and a safe return to the staging of large-scale outdoor events, remains highly uncertain. Unsurprisingly, local authorities are unwilling to commit to a point at which clearance might be given for the usual summer events.

“As a consequence, it has become increasingly apparent that we cannot start the installation of the course and the construction of the site in March with a reasonable expectation that it will be possible to stage a regatta.”

If the event can go ahead, it would either be at the usual venue from August 10 to 15, or at Dorney Lake some time in August, with dates yet to be confirmed.

In either case, it is likely that only a limited number of members would be allowed to attend.

Sir Steve explained: “The possibility exists that a regatta at Dorney may even have to be behind closed doors. Nonetheless, our hope is to provide some form of opportunity for our competitors finally to race, after months of distance from the sport that successive lockdowns have necessarily enforced.

“If we are able to stage a regatta, our current plan is to broadcast the event so that the rowing community can follow the racing, whether or not attendance is possible.

“We recognise and regret that these revised dates will present a challenge to many in the sport, especially school and university boat clubs.  They will also present a challenge to our suppliers, contractors, local traders, landowners and the Henley and Remenham communities.  It is therefore our task in the coming weeks to continue engaging with as many stakeholders as possible and ascertain the feasibility of staging a regatta in August.”

Even if it was possible to hold the event earlier in the summer, access to much of the regatta site is not within the control of the Stewards.

Sir Steve says this is an area of concern and would be a “public health risk that would be unacceptable to the regatta”. He says there is still a possibility of the regatta being cancelled for a second year in a row.

He added: “The committee will therefore strive hard to deliver a safe regatta later in the summer, in particular for the sake of the athletes and coaches who have worked tirelessly to give themselves the chance to race at Henley this year, and for whom Henley is an unrivalled beacon in the annual racing calendar.

“However, our highest concerns will remain the health and safety of all those involved in the staging and running of the regatta, wider public health, and the regatta’s role in society’s efforts to limit the spread of covid-19.

“The possibility therefore remains that we may ultimately have to cancel the 2021 regatta. The cost of potential cancellation will depend on the timing and circumstances and it is too early to provide guidance on the financial and membership subscription fee implications.

“However, we are acutely conscious of the financial contributions already made by our members since January 2020, in the context of ever-changing economic conditions.

“I can assure you that the committee will carefully manage the timing of our decision-making so as to minimise our potential liability, relative to the likelihood of us being able to stage the regatta, while striving to keep that option open for as long as reasonably possible.”