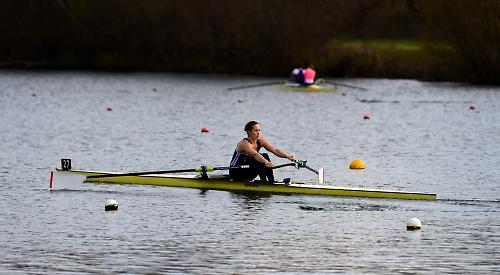 The rowers won three gold, three silver and three bronze, while the para crews came away with two gold and one silver.

Leander had 31 athletes at the three-day event in Varese, Italy, with 17 picking up medals on the final day on Sunday.

Helen Glover, who was making her first competition appearance for five years since the Rio Olympics in 2016, continued her comeback ahead of the Tokyo Games this summer by winning gold.

The 34-year-old, who was racing with Leander’s Polly Swann in the women’s pair, led the field throughout the final. They held off second-placed Romania to win in seven minutes and 2.73 seconds.

Glover, who lives near Maidenhead, said: “Coming into the race we decided that the middle 1,000m is where we really wanted to be strong and we really felt in control during that section.

“Maybe that just left us missing a gear at the end, but I’m just really happy that we dug in and got the result.

“Far, far more questions would have been answered just by us winning this race. I was literally thinking today ‘am I going to make it down the track?’, which is silly because I do it in training every day, but just something about racing makes those doubts come to the surface.

Swann, who worked as an interim foundation year doctor when the coronavirus pandemic delayed the Tokyo Games, said: “It’s been a long winter, so just to come out and race again — especially with Helen, it feels pretty epic.

“I don’t think we came here expecting to win – we expected to have speed, but it’s really nice to put the cherry on top of the cake and win.”

Wynne-Griffith said: “We didn’t get out to the best start, but no one panicked and we found a rhythm. We know what works for us from the race for lanes, and the boys just dug in.

“There were some really good shouts from the middle of the boat, Henry coxed it really well and kept letting us know where we were, and we just built as we went down the track. It’s nice to get a win in the first race of the season – obviously it has been 20 months. This is only the start though, and we’ve just got to keep building.”

The men’s four, comprising Leander’s Matt Rossiter and Sholto Carnegie with Oliver Cook and Rory Gibbs, won gold with a dominant performance, even though it was their first race since the World Championships in September 2019.

The para crews set the tone at the start of the start of the day bringing in a silver medal in the single for Benjamin Pritchard and gold in both the mixed double for Lauren Rowles and Laurence Whiteley and the mixed quad sculls for Leander cox Erin Kennedy with Ellen Buttrick, Giedre Rakauskaite, James Fox and Ollie Stanhope.

Elsewhere, there were silver medals for former Leander captain Vicky Thornley in the women’s single sculls and club-mate Hannah Scott in the women’s quad alongside Mathilda and Charlotte Hodgkins-Byrne and Lucy Glover. The double scull of Imogen Grant and Emily Craig also picked up silver. Thornley, who lives in Bix, gave everything over the 2,000m course and acknowledges she has more work to do to improve.

She said: “It’s not quite the position I wanted to finish in and it was a bit too big of a gap to be honest. I felt like there were a few mistakes, but generally I did make the changes that I wanted to make from the semi-finals.

“In a way that’s definitely a positive to take away, and just remembering that this is our first race of the year and we’re building through the season — so that was definitely a good step on from the semi-final and a good place to start the season.”

The new-look women’s quad, which had only been together a couple of weeks, did take an early lead and later kept their heads with a strong last 750m to cross the line in second.

Scott, who was making her senior international debut, said: “At the end there I can tell we were just catching the Dutch and we were just trying to get our legs down fast enough to catch them, but for our crew which has only been together a couple of weeks now, at this stage in the Olympiad, I’m pretty proud of us.”