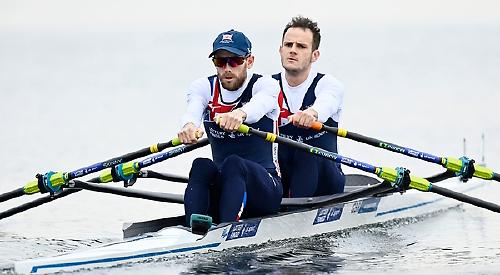 THREE Leander athletes will be amongst four Great Britain boats that will be competing in the final Olympic qualification regatta in Lucerne, Switzerland this weekend.

Holly Nixon, Harry Glenister and Sam Mottram will be aiming to help Team GB add to their 10 boats that have already qualified for this summer’s games in Tokyo.

Hot on the heels of their bronze medal win at the European Championships in Varese in April, Nixon and her Tideway Scullers’ School partner Saskia Budgett are returning to the water in the women’s double.

Looking ahead to the event Nixon said: “We are excited and nervous about the regatta but are going in with a clean slate after the Europeans, we need to keep our heads in the job to execute our plan and see where we go from there.”

The men’s pair of Glenister and Morgan Bolding of Oxford Brookes University Boat Club will be aiming to build on their seventh place finish in the Europeans and secure Olympic qualification.

Glenister said: “We gained some good experience at the Europeans and finished ahead of some of the boats we expect to be racing against in Lucerne. We feel quite confident, are in really good shape and looking forward to racing.”

Returning to international racing after a frustrating Europeans which saw them withdraw due to injury, are the lightweight men’s double of Mottram and Oxford Brookes University Boat Club partner Jamie Copus.

Previewing the event Copus said: “We’re in a good spot at the moment, we know the task ahead will be tough with at least six crews all performing at similar speeds, but we are in as good a position as we can be and are looking forward to it. We will certainly give it everything we’ve got out in Lucerne to finish in the top two and claim that qualifying spot.”

Matthew Haywood, of Nottingham Rowing Club, will compete in the single scull as GB’s fourth entry in the regatta.

Brendan Purcell, director of performance at British Rowing said: “With less than 80 days until the postponed Olympic Games, it’s a last chance for four of our crews to secure final places on the start line. Our aspiration is to have as many boats as possible on the start line in Tokyo and with the depth of talent in our squad, it will be great if we can add to that tally.

“Each of these four crews have learnt from their return to racing at the Europeans and we know they will try their hardest to finish in the top two at the final olympic qualifying regatta to secure those all important final Olympic places.”