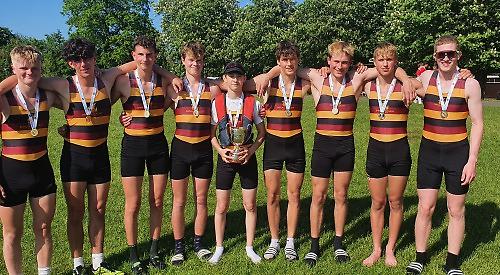 CREWS from Shiplakle College, Henley Rowing Club and Leander Club competed in last weekend’s National Schools’ Regatta at Dorney Lake in what was the first competitive action for most crews for more than a year.

The regatta was a more limited affair than usual due to covid restrictions with racing only for the older age groups.

The format was also different with the first race a time trial and then depending on numbers crews going straight to final A, B or C.

Shiplake College had the best set of results of the three clubs as their athletes took home 26 medals between them, winning the championship girls’ quad, the second girls’ quad and J16 eight events and taking silver in the boys’ second eight.

The championship boys’ eight qualified for the A final while Charlie Crisp came third in the B final of the Championship Sculls Cup.

First up for Shiplake was the boys’ second eight in the Elsenham Cup where they posted a time only one hundredth of a second slower than Eton College in first place.

The girls’ second quad posted the fastest time in the Wimbledon Centenary Cup by eight seconds while the girls’ championship quad were also first in their Sherriff Cup time trial by one second.

Crisp missed out on a place in the Championship Sculls Cup A final, out of a field of 23 competitors, by just one second while the Championship boys’ eight secured sixth place to proceed to their final.

In the A final the girls’ second quad of Casey-Jane Green, Scarlett Maleham, Megan Hadfield and Ellie Webb finished in second place.

The girls’ championship quad had a slower start to their A final but fought back to win their event by 0.6 of a second.

In the final Shiplake won gold by defeating Shrewsbury School in second place and Radley College in third.

Director of rowing at the college, Dave Currie, said: “It’s an absolute pleasure to see all the hard work and months of training at school and in lockdown coming to fruition.

“We had no idea of our standard going into the Championship Regatta but knew we had left no stone unturned in our preparations.”

Henley Rowing Club had five crews competing on the Saturday and three on Sunday, with the club securing a gold, silver and bronze medal. The girls’ coxed four of Blair Fitzgerald, Freya Engal, Evie Tingate, Ella McKay and cox Caitlin Emery finished second in the time trail. In the final they were fourth at 500 metres, second at half way but with consistent and sustained pressure pulled through Marlow with 750 metres to go to win by nearly two lengths.

In the championship girls’ quads Laoise O’Donohue, Ailish Harkin,Holly Cookson and Natalie Schoenmakers finished sixth in the time trail, making the A final but in a strong field were unable to improve on this position in the final.

The relatively young and inexperienced crew finished second in the time trial and in the final gave the Lady Elanor Holles School a run for their money whilst holding off a Latymer Upper School who were pressing at their heels for the whole race. Lady Eleanor Holles School won with Henley second and Latymer third.

In the championship boys quadsculls, the Henley crew of Guy Hutchins, George Lauchlan, David Wallace and Cameron Seagar finished fifth in the time trial to reach the A final. After a sluggish start, leaving them at the tail of the field, the crew hit its stride and came through to secure fourth place, just outside the medals.

The boys J16 crew of Matthew Provoost, Sam Pratt, Alex Girling and Connor O’Shea reached the B final, finishing ninth in the time trial but fought hard in the B final to go one better, coming home second and eighth place overall.

The girls J16 quad Sophie Graham, Karima Erbolat Hannah Boddy, Abbie Artherton finished fourth in the time trail to earn a place in the A final where they were able to improve on this
position and took the bronze medal behind Marlow and Headington.

Leander Club had just the one boat racing in the Forest Cup for boys Championship quads, The crew of Tristan Grainge, Daniel Landau, Ben Jackson and Sergej Vujosevic finished third in the mornings 1900m time trial to qualify for the A final. In the final the Leander crew raced well against tough competition from Tideway Scullers School and Windsor Boys School to finish thrid and take the bronze medal.

Mark Banks, Leander Clubs chief coach and drector of rowing said: “It was good to see so many juniors racing again. The national schools regatta is a great event.

“Well done to our crew: it’s a good start and something we will look to build on through the summer season.”