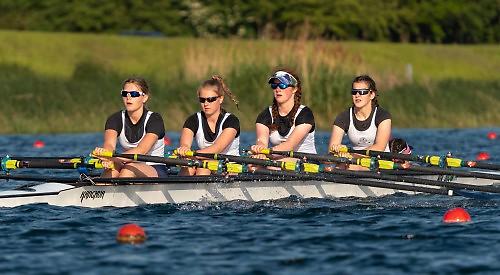 HENLEY Rowing Club’s junior girls dominated in all their three events at the Junior Sculling Regatta held at Dorney Lake.

The event, held on bank holiday Monday, was for J15 crews and J16 small boats which had not been allowed at National Schools’ Regatta due to covid restrictions limiting numbers.

The junior sculling regatta was also limited to 250 crews and was fully subscribed with entries from nearly 90 clubs from across the country.

Henley Rowing Club had three crews in the WJ15 girls events whilst the boys had two J15 quad entered.

In the A final the Henley crew put a determined final 500m to improve on their position to finish fifth.

Competing in three of the four events available to J15 girls the Henley crews dominated, finishing first in all three time trials — quad, double and octuple — to qualify easily for the A finals and then taking gold in all three events.

The first A final was the double of Tabbie Hall and Freya Weiser. By 500 metres the crew were already six seconds up on nearest rivals Headington and they continued to build on this finishing 28 seconds ahead of them at the line and more than two minutes quicker than the sixth placed boat.

Having finished only two seconds ahead of Wimbledon High School in the time trial a tight race was expected. Whilst always leading the Henley girls didn’t shake Wimbledon off until the 1,000 metre mark but after this powered away to finish a comfortable two lengths clear.

In the final race of the day was the quad of Matilda Macartney, Gwennie Hunter, Ella Dickson, Florence Lenthall and cox Matilda Ley.

The Henley crew was clear of the opposition by 500 metres and continued to build on this through each 500 to finish 10 lengths clear of nearest rivals Sir William Perkins School Rowing Club and nearly a minute ahead of the sixth placed crew.