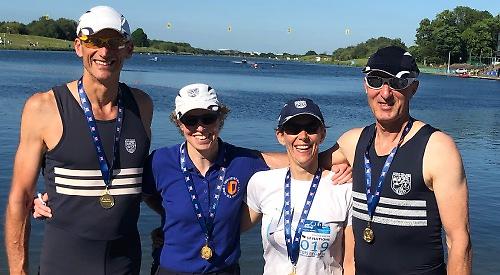 With competitors restricted to one event only, Upper Thames entered only two crews at the British Rowing Masters Championships at the National Watersports Centre in Nottingham last weekend where both crews came away with gold medals.

Naomi Ashcroft and Becks Sadler won the double sculls in the 50 to 54 age category, rowing through a fast-starting Mortlake double.

Peter Jacobs and Dan Sadler won the coxless pairs in the 55 to 59 age category, holding off a strong finish from a Maidenhead pair. This win extends Jacobs and Sadler’s unbeaten streak in their age category to nearly 14 years.

On the previous weekend, Upper Thames sent several senior and masters crews to the Metropolitan Regatta at Dorney Lake.

This regatta took place over the full 2,000 metre course and the masters crews lined up alongside senior men and school crews, initially in a time trial and then in a set of finals grouped by the time trial results.

The two masters eights ended up in a final with two other masters crews and four senior men’s crews. The 50 to 54 age crew finished a close second place in their final but won medals for being the fastest masters crew.

The double scull of Chris Gilligan and Nick Mills finished third in the C final in the senior men’s open double sculls competition.