Henley show strength in depth with victories at two regattas 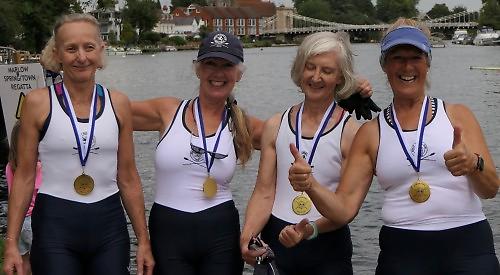 They were competing at the Marlow Town Regatta on Saturday and British Rowing’s J16 regatta in Nottingham on Sunday.

At Marlow, the boats raced on the River Thames over a 900m three-lane course between Bisham Abbey and Marlow Bridge.

Coronavirus restrictions meant there were no spectators and the format required crews to race heats, stay on the water and return to the start for the final.

The Vet E crew were set off six seconds ahead of the two younger Vet D crews. Following a fast start, Henley increased their lead over the two chasing crews and won the race by a clear margin.

Henley’s WJ15 squad then continued their winning streak with wins in the octo and quad competitions and also stepped up an age group to win the WJ16 quads.

The quad Daisy, Matilda, Evie, Sophia and Emma Eltze then had a comfortable victory in the heat over Pangbourne and Wallingford rowing clubs before scraping a 1ft victory in the final against Maidenhead.

J15s Tilly, Tabbie, Florence and Anna took on the older J16 girls from Abingdon and Wallingford in the J16 coxless quads and won their heat before registering an easily verdict in the final against Sir William Borlase.

For Henley’s WJ14’s their first race in wave one, saw the crew of Honor Kennedy, Josie Savin, Annie Hunt, Kaia Marston and cox Charlotte Tong make their way to the final, only to come up against a crew from Headington School who took the win.

In wave two, for the WJ14 quads, the crew of Holly Fuller, Nicolette Pagdin, Jessica Mack, Lilya Wild and cox Florence French had better luck in their final, beating another crew from Headington School. This was their first ever win at rowing.

The crews then jumped in the octo, where Jemima Butterworth sat in for Annie Hunt, and Matilda Ley coxed. They again made the final, only to be beaten by a very strong crew from Headington School.

The J14 boys quad also had another successful day. The crew of Jacob Len, Zak Jenkins, Callum Gaffney, Felix Richardson and cox Viggo Gibbons dominated their races and won both their heat and the final convincingly.

Viggo had earlier helped their older J15 counterparts of Connor Simpson, Theo Szweda, Sam Hunter, and Louis Bolton to the final of their equivalent event.

The other J15 quad of Roman Meredith, Kit Daly, Pascal Giret, and Albert Butler with cox Abi Eltze missed out on progressing to their final.

All eight boys, with Abi coxing, tried a new event for them, the octuple scull, but again missed out in a close final to more experienced opposition.

On Sunday, Henley entered five boats at the J16 regatta at the National Water Sports Centre, hosted by the GB Rowing Team. A boys’ and girls’ quad, a boys’ single, and a girls’ coxed and coxless four all took to the water. The standout performance on the boys’ side came from Guy Hutchins in JM16 1x.

Over a 1,500m course in tricky conditions caused by a strong, gusty tailwind, Guy came first in the time trial in a field of 16. He went on to win his semi-final by nearly five seconds.

In the final he found himself down by clear water after 500m, behind Bain of Maidstone Invicta, but gradually clawed his way back to an overlap.

In the final sprint to the line he gained again, but ran out of course, finishing second, 0.63 seconds behind the winner. His time of 5:26.52 was exceptionally quick at J16 level.

The J16 4x of Matthew Provoost, Sam Pratt, Alex Girling and Connor O’Shea, had a day of mixed fortunes, finishing fifth in the B final.

The girls’ coxless four was the first final of the day having a straight final coming home in third place.

The coxed did well to overturn Wimbledon High School, who beat them in the semi-final, to take third place.