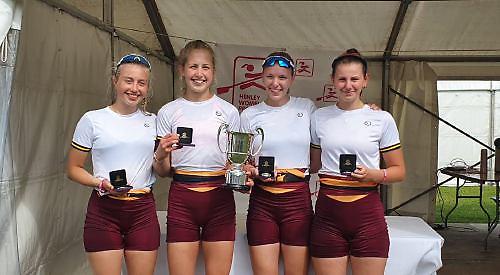 THERE was success for Shiplake College at last weekend’s Henley Women’s Regatta whilst Henley Rowing Club and Upper Thames were both losing finalists.

The event marked an end to a successful return to racing on the Henley stretch after the 2020 cancellation of the regatta due to the covid-19 pandemic.

The regatta was held under Covid-secure rules, with changes this year including no medals ceremonies and no passengers in the umpires’ launches with racing taking place over a shorter course.

The crew of Merry Oakes, Izzy Blake-Hurworth, Nicole Dunn and Mia Vickerman, progressed from the time trials on Saturday morning to compete in the heats in the afternoon.

First up in the heats they raced Lea Rowing Club, winning by four lengths and posting the fastest time of the day, completing the 1,500m distance in four minutes and 41 seconds.

The Shiplake quad took command of the race early on and won by one-and-three-quarter lengths in a time of four minutes, 29 seconds.

Dave Currie, director of rowing at Shiplake College, said: “It’s great to see the girls reaping the rewards of a hard year of training under unusual circumstances.

“This is the first time Shiplake College has won Henley Women’s Regatta as a full Shiplake crew.

“Our girls rowed with confidence and looked like a class act throughout each round of the regatta. In the final they took an early command of the race and demonstrated why they are currently the best junior girls’ quad in the country.”

Head of girls’ rowing, Dan Safdari, added: “It’s a huge win for the college, having never won the junior quad event before and I’m extremely proud of the crew and how they performed over the weekend.”

Upper Thames, who had two entries entered in the regatta, were losing finalists in the aspirational quads.

The aspiration quads event had a large entry and the top 16 fastest crews were selected by a time trial for the side by side match racing on the Saturday and Sunday.

After beating Cardiff University in the first round on Saturday the crew of Daisy Hampton, Alice Pickthall, Sian Hinton and Courtney Edmonds progressed to the quarter-final with Hartpury BC who withdrew before the race and the Upper Thames crew had a row-over.

The semi-final saw Upper Thames defeat London RC A by half a length. In the final the head wind increased and after a good start Upper Thames were unable to stay with the power from the larger crew from Tideway Scullers School who won the event.

Meanwhile Naomi Holland competed in the championship lightweight single sculls and had a close race in the semi-final, losing by one length to Reading University. The result would have been even closer if Holland hadn’t been caught by quite a strong wash coming through a gap in the booms.

Henley Rowing Club had six crews compete at the regatta with five junior crews all making it through the time trials to compete in the side by side racing.

The Henley double of Penny Hammand and Rebecca Abbott were the fastest non qualifiers.

The Henley eight octuple of Georgie Pollard, Ellie Harkin, Jasmine Stockdale, Freya Engel, Sophie Underwood, Ailish Harkin, Natalie Schoenmakers, Lucy Jones and cox Caitlin Emery were one of the fastest qualifiers earning them a bye through to Sunday’s racing where they beat Putney High School in the quarter-final.

In the semi-final Henley beat the National Schools champions Lady Eleanor Holles School, but in the final a resurgent Headington School proved quicker to leave Henley as losing finalists.

The junior coxed four of Ella McKay, Tess Lewis, Evie Tingate and Blair Fitzgerald were hit by disruption as Sophie Elze had to step in as cox on the morning of the regatta as two other cox’s had to self isolate due to covid.

The crew achieved a comfortable victory over Lady Eleanor Holles but couldn’t overcome Tideway Scullers School in the quarter-final.

In the J16 age group, the quad of Eyla Wild, Hannah Boddy, Sophie Graham, and Yasmin Lakatos lost to Tideway Scullers in the quarter-final. The coxed four of Amelia Sterjo, Karima Erbolat, Lauren Stokes, Abbie Artherton and cox Matilda Ley got off to a poor start in their quarter-final heat against Yarm School and were quickly two lengths down and having to play catch up which they nearly did losing by just three feet.