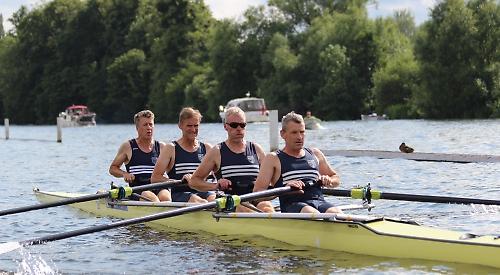 More than 900 competitors including many ex-international and ex-Olympic rowers took part in the event over 1,000m course of the Henley Royal Regatta course.

The first Upper Thames crew to win was Jeremy Dobbin and Clive Cooper in the H double sculls category.

Upper Thames teamed up with Wallingford Rowing Club to win the women’s E eights. Next up was Bob Gullet in the H single sculls who had one of the best races of the afternoon losing by just half-a-length length to his opponent from Dart-Totnes. The Upper Thames D8 had won by half-a-length against a crew from Molesey containing several ex-international oarsmen.After a fast start Upper Thames held the half length advantage as Molesey tried but failed to get level. The women’s F double sculls crew of Judith Burne and Helen Mangan had a comfortable victory against Eton Excelsior.

In E coxed fours Upper Thames beat Marlow in the final. Zoe Thomas picked up her second winners medal of the day having also steered the D eight to victory earlier.

In one of the last races of the day, the G coxless four lost by two lengths to Reading.