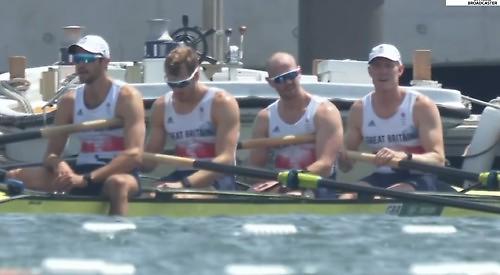 ATHLETES from Leander Club in Henley have won Great Britain’s only rowing medal to date at the Tokyo 2020 Olympics.

It came on an otherwise disappointing day as three other British crews finished fourth in their finals.

These included the men’s four, who failed to win a sixth straight Olympic gold.

The quad, who also won bronze at this year’s World Rowing Cup II, held off late charges from Australia and Poland, sparking jubilant celebrations on the water.

The Netherlands added Olympic gold to their world championship title as they won in a world best time of five minutes and 32.03 seconds, with their British rivals just 1.72 seconds behind.

Beaumont, 27, who lives in Nettlebed and is captain of Leander, said: “It was wild out there — these conditions are rough with a tailwind but it’s what we’re used to back at home.

“We’ve trained in this so many times and it didn’t shake us. We decided, ‘we’re in lane one with an outside chance of a medal so let’s take it out, let’s take it to them’ and we really did.

“I’m so happy as it’s another step on our way towards getting a gold. We’ve built on years of hard, hard work and winning the silver medal is awesome. We’ve been part of a rowing team that’s had huge success but in our sculling team there’s a tradition of being in the shadows a little so there’s huge pride. Thank you everyone back at home for your support. Best fans in the world.”

Groom said: “We just decided to throw everything at it and the result would be the result whether we come sixth, first or second.

“It was pretty much the perfect race for me. Never in my wildest dreams did I think this would happen. I absolutely loved every minute of rowing with these boys and I’m so pleased that we put together our best performance when it mattered the most.”

Leask said: “I basically knew the whole way where we were and had a pretty good view of the whole race from where I was sitting.

“We just did what we wanted to in that first half, we got out well and I could see us in a really good position. It was very encouraging and the result just feels amazing.”

Barras said: “Thank you everyone for all your help and support, best wishes and messages of congratulation. We are one team and can’t wait to come home and celebrate with you.” Beaumont shared a photograph of his silver medal on Twitter, saying: “Pretty cool morning with the guys!”

The men’s four, including Leander’s Sholto Carnegie and Matt Rossiter, with Ollie Cook and Rory Gibbs, finished fourth after they went off course at the climax of their final.

An emotional Cook, who sat at bow and was responsible for steering, was consoled by Carnegie as he tearfully accepted blame for the error in a post-race television interview. The result ended GB’s dominance in the event following five successful golds between the 2000 and 2016 Games, the first of which was won by Sir Steve Redgrave, now chairman of Henley Royal Regatta, alongside Sir Matthew Pinsent, James Cracknell and Tim Foster.

The four were seen as Britain’s best hope of winning gold as they are the reigning European and World Rowing Cup II champions.

They were placed second in the final 500m of the 2,000m race before they faded and veered off line towards the Italian boat, coming within just over an oar’s length of a collision.

Cook said: “I screwed up — I forgot the steering a little bit and that cost us a medal. To the lads, I’m sorry I didn’t steer us the best line at the end.”

Carnegie added: “I don’t think we can blame anything. All season, we’ve obsessed about being consistent and we weren’t when it really mattered.

“Fourth place at the Olympics wasn’t the result we came for but that’s the nature of competition — so brutal, yet fantastic. Massive congratulations to all the medallists and thank you for all the love sent from back home. It means the world to have such an amazing support network.”

Australia took gold, with Romania and Italy also on the podium.

All four of the British crew were making their Olympic debuts.

Meanwhile, Leander’s John Collins and Agecroft RC’s Graeme Thomas finished fourth in the men’s doubles sculls after failing to make a late charge for a medal.

Collins, 32, of Upton Close, Henley, said: “I’m obviously pretty gutted. I thought if we got it really right we could finish on top and a medal would be very do-able. At least we put in a fight and I don’t know what we could have done better.”

Thomas said: “Fourth is just an awful place to come but sport is never a given and that’s why it’s exciting.

“We’ve got to say thanks to the Japanese people for giving us a Games and I’m pleased to have ticked that box — I’m an Olympic finalist now.” France won gold, finishing 0.20 seconds ahead of the Netherlands with the Chinese pair taking bronze.

In the women’s fours, Leander’s Rowan McKellar and Karen Bennett, with Hattie Taylor and Rebecca Shorten, were pipped to bronze as Ireland won their first medal of the Games behind gold medallists Australia and the Netherlands.

Alastair Heathcote, general manager of Leander Club, said the club was proud of the men’s quad.

He said: “They’ve all worked their way up through the club’s development squad and have been with us for many years — training them to be the best athletes they can is what Leander is all about.”

He said the men’s four’s result was particularly unexpected, adding: “It was a shame it turned out as it did but they were flat-out trying to win.

“Fourth is the hardest place to be as it’s just out of the podium but they deserve all the credit for getting where they did. It’s a real shame but hopefully there will be a chance for them to compete in the next Olympics in Paris.”