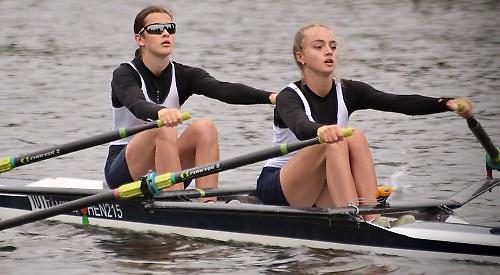 The 500m sprint regatta was organised in waves throughout the day so competitors could race in more than one event.

Some of the Henley girls came away with three trophies after the club picked up wins in both WJ15 and WJ14 quads, in three double sculls events WJ16, WJ15 and WJ14 and a win in WJ15 single sculls.

In the first wave of the day Henley had three WJ15 double sculls entered — Florence Lenthall and Freya Weiser; twins Sophie and Emma Eltze and Allysha Stokes and Ruby Roger. In their first round Lenthall and Weiser had a comfortable five length victory against Guildford RC, the Eltze twins lost narrowly by three feet to City of Bristol while Stoke and Roger had a bye to the semi-final.

In the semi-final Stoke and Roger beat Lenthall and Weiser before going on to win the final against City of Bristol by three lenghts. In the second wave of racing Weiser teamed up with Matilda Macartney to compete in the older WJ16 double sculls.

A bye to the semi-final saw them beat Hereford RC by three lengths before going on to win the final by a similar margin against Weybridge RC. Also in this wave Gwennie Hunter and Anna Merritt competed in the WJ15 single sculls. Hunter beat City of Bristol in the first round which then saw her face Merritt in the semi-final. Following a tight race Hunter came out on top before going on to beat a sculler from Guildford RC in the final by four lengths.

The WJ14 quad of Florence Short, Lilya Wild, Josie Savin, Kaia Marston and cox Eleanor Quinn got through their first race against Surbiton High School with a two length victory. They then beat clubmates Holly Fuller, Nicolette Pagdin, Annie Hunt, Honor Kennedy and cox Alysha Stokes in the semi-final by one length. In the final the Henley crew beat another Surbiton HS crew by one length.

A first round race against Barn Elms was close for the Gwennie Hunter, Sophia Jobbins, Matilda McCartney, Florence Lenthallm and cox Freya Weiser who won by three-quarters of a length in one of the fastest times of the day.

In the other semi-final race the quad of Allysha Stokes, Emily Simmonds, Sophia Spanswick and Emma Eltze cox Sophie Eltze beat Staines Boat Club by two-and-a-half lengths to make an all Henley final. In a tight race the Hunter boat came away with the one length victory. The WJ14s had three boats racing in the double sculls.

After getting through the quarter-final, by beating a Surbiton HS crew the double of Nicolette Pagdin and Lilya Wild, came up against Henley clubmates of Honor Kennedy and Josie Savin. In a close race, the Pagdin and Wild double triumphed by half-a-length. In the final they beat a Surbiton HS crew by two lengths.