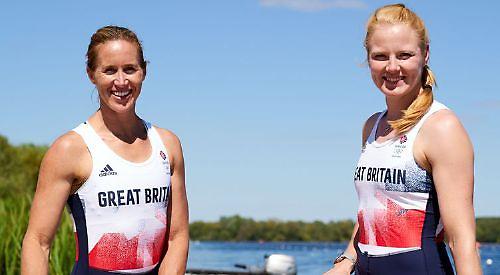 TWO-TIME gold medallist Helen Glover has ruled out another Olympics rowing bid after her hopes of a fairytale finish in Tokyo were dashed.

Glover, 35, and Polly Swann, 33, finished fourth in the women's pair in the early hours of this morning (Thursday) at the Sea Forest Waterway.

“In Rio I said it was my last one. This time I'm saying ‘no, it's definitely it’,” said Glover.

Emily Craig and Imogen Grant missed out on a medal by 0.01sec in a thrilling lightweight women’s double sculls.

Team GB have only picked up one rowing medal, the silver claimed by the all-Leander Club crew of Harry Leask, Angus Groom, Tom Barras and Jack Beaumont in the men's quadruple sculls on Wednesday.

In contrast, Britain was the leading rowing nation at Beijing 2008, London 2012 and Rio 2016, claiming six, nine and five medals respectively at those Games.

Glover, who lives near Maidenhead, won gold in 2012 and 2016, was aiming to become the first British woman to win at three Olympics.

She said: “We're pleased with the result – it shows our hard work. You can do anything you want to do. Trying and failing is no problem as long as you try"

Glover, who gave birth to twins Kit and Willow last year, is the first mother to make the nation's Olympic rowing team. She and her husband, television presenter Steve Backshall, had son Logan in 2019.

Her comeback began last March, when the Tokyo Games were postponed for 12 months until this summer because of the coronavirus pandemic.

She reunited with Swann, who partnered Glover when Heather Stanning took a break after London 2012.

Swann, an NHS doctor, was also on the comeback trail after taking a break to focus on her medical career.

The Leander athlete said: “For Helen, she was looking after three kids. For me, I was working in a hospital a year ago today.

“I don't think there's many people in the Olympic athlete set-up that can say these things and be in a final.

“We certainly fought our all to try and get onto that podium. I can't fault our determination for that, and more so the way that we fought every day in training.”