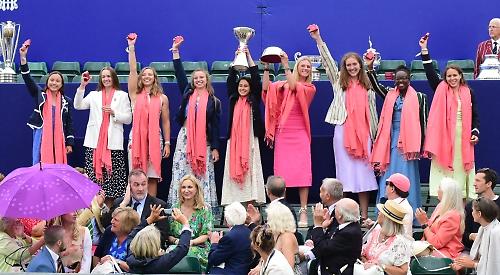 There was also an historic victory for the junior women’s four from Shiplake College in the Diamond Jubilee Challenge Cup.

A composite crew of athletes from the college and Sir William Borlase’s Grammar School in Marlow won the Visitors’ Challenge Cup in 1984 against Reading University.

The Leander crew beat Thames Rowing Club “A” by a length and a half.

Redgrave, who also who won the Hambleden Pairs Challenge Cup in the bow seat with Dear, said she hopes the success of the women’s crews this year will inspire others to get involved in the sport.

She said: “This is why we do it — to empower other women to take on the sport and inspire them to achieve what they want to achieve.

“Looking at our club and the standard in it I’d be inspired to join it. I hope it comes across that we’re hard-working strong women and we back each other and support each other, and we dominate.”

Redgrave and Dear, who are on Team GB’s rowing development squad, won the Hambleden Pairs Challenge Cup in eight minutes and 46 seconds by three-and-a-half lengths.

Dear, the vice-captain of Leander, has competed in the Remenham race three times before and reached the finals in 2019 but lost against the Waiariki Rowing Club.

The pair won a bronze medal in the World Rowing Cup III in Sabaudi in Italy in June as part of the GB rowing team’s young “Project Paris” squad for the 2024 Olympics.

Speaking about the Remenham race, Redgrave said: “The weather was challenging but we’ve been training all year in smaller boat projects.

Lola Anderson, 23, won the Princess Royal Challenge Cup against Lauren Henry of Leicester Rowing Club to become the second ever GB winner of event since Debbie Flood in 2000.

She dedicated the win to her late father, Don Anderson, a national rower who passed away in December 2019.

She said: “I’m hugely proud of my dad — he’s massive inspiration to me and gave me a lot of passion for the sport.

“He always encouraged me no matter how many time I capsized. I think about him everyday and when I’m in the water I do feel very close to him.

“It’s days like this where I don’t just know he will be proud I can really feel it. Today was really for him.

“When I can give back to what he gave me it gives me such gratitude it makes me feel like he’s here. It can’t put it into words how much that means to me.”

Anderson, a silver medallist at the Junior World Championships in 2016 and an U23 World Champion in the quad in 2019, won in eight minutes, 58 seconds by a narrow three feet as Henry sprinted to the finish despite a consistent lead from Anderson.

During the race, one of Anderson’s contact lenses fell out of her right eye leaving her with an “irritating” pain.

Speaking about the race, she said: “My contact did fall out but it wasn’t too bad, not the end the world. At the world cup there was some issues as well but a part from it being a bit irritating it was fine.

“The race felt very tight. Lauren is a great athlete, she is young and she has been pushing everyone to the absolute limit — it was cool to race her.

“I’m not known for my sprinting and I know she’d have a big kick in her at the end. I’ve never made it past my first round at regatta, so I was pleased I made it past the first round and to the finals and won.

“Emma Twigg was the last person to win this and I look up to her and Debbie Flood and Vicky Thornley, they’ve been my inspirations.

“I spent half this year having a back and shoulder injury so it’s not been the most smooth training year so I hope to be more fit and healthy next season and get to a more stable level and maybe even reach the team.”

Anderson also recently secured a bronze in the single sculls in the World Rowing Cup III in June as part of the same squad.

The Princess Grace crew of Natasha Harris-White, Cordi Mahony, Katherine Maitland and Michaelle Truax won the trophy in seven minutes and 46 seconds against a composite team comprising of athletes from Thames Rowing Club and Neptune Rowing Club, Ireland by one length.

Former Gillots School student Harris-White, who was recently selected to represent GB at World Cup III in Rotterdam, said: “Even when we were down, we had all of our trust in each other. At the 600 mark we just went as we could see them just in front of us. We were just shouting, ‘go, go, go’.”

The Town Challenge Cup final was between two women’s Leander crews. Crew “A”, which won in seven minutes and 58 seconds comprised of Cessford, Irwin, Long and Davies, who also won the Remenham cup.

The two other new events for women were The Island Challenge Cup and The Junior Women’s Eights.

The Island race was won by Oxford Brookes University “A” against the University of London “A” in seven minutes and 10 seconds by half a length.

The Junior Women’s Eights was won by Headington School against Surbiton High School in seven minutes and 42 seconds by three lengths and three quarters.

Henley Rowing Club competed in the heats and won against Putney High School and then The Tideway Scullers’ School but lost in the semi-finals against Headington by two-and-a-half lengths.

As well as the women’s events, Leander were also successful in the Queen Mother Challenge Cup, which was a straight final against a composite crew from the University College in Cork and Skibbereen Rowing Club in Ireland.

Leander captain Beaumont, 27, who lives in Nettlebed, said he was glad to see the regatta happening after it was cancelled last year due to the coronavirus pandemic, the first time in the event’s 182-year history outside two world wars.

He said: “In terms of the regatta I’m just so happy it’s happening — it’s so great and it’s even better that we’ve won.

“I’m so proud of all the athletes and how they worked hard throughout the pandemic training from home.

“I’m grateful to all the crews who just got here because it’s not been easy and they worked in difficult situations.”

This is the ninth regatta victory for Beaumont who also won the same cup in 2019 with Peter Lambert, Groom and Jonathon Walton.

The Prince of Wales Challenge Cup crew of Victor Kleshnev, Olly Costley, James Cartwright and Jack Keating won in six minutes and 42 seconds by one-and-a-half lengths against a composite crew from Twickenham Rowing Club and Queen’s University in Belfast.

Keating, who won two golds in the men’s quad at the Coupe de la Jeunesse in 2017, said: “It was good. We got pushed the entire way.

“We did over 700 days of training for it. We were meant to win it last year but because of covid we didn’t race but we worked hard all season.

“We all had individual challenges to face but we turned these into good things.”

Athletes Georgie Brayshaw and Jess Leyden lost the Stonor Challenge Trophy against a composite crew comprising of athletes University of London and Cambridge University by three-quarters of a length.

Leander Club also formed a composite crew with Upper Thames Rowing Club to compete in The Visitors’ Challenge Cup and won against Henley Rowing Club in the first heat on Thursday by two-and-three-quarter lengths. They then lost to the full Leander crew in the second heat on Friday by two-and-a-half lengths.

The Stewards’ crew of James Robson, Harry Glennister, Ryan Todhunter and Ed Grisedale lost to Hollandia Roeiclub, Netherlands by one length in the semi-finals. Matthew Peters and Joe Willis lost in The Silver Goblets & Nickalls’ Challenge Cup to Cambridge University by two lengths in the semi-finals.

They previously beat Oxford Brookes University “C” in the first heat on Friday.

Charles Cousins, racing in a composite team with an athlete from Reading University, lost the Double Sculls to a composite crew from the University College in Cork and Skibbereen Rowing Club in Ireland.

Mathew Beechey, a chief coach at Leander, summed up the regatta as “fantastic”.

He said: “We had 44 athletes in the finals which was brilliant it was great to be back racing. We missed out on some close races but it was absolutely amazing. The athletes have worked so hard throughout the lockdown. It’s phenomenal. I think our record is 10 semi-finals and we did 15 so for the guys who lost, they are as much winners as all the others.”

Meanwhile, Shiplake College celebrated a historic win with its first ever women’s crew and non-composite crew to win a medal.

Dunn, who qualified for the GB training camp in November, said: “The race was absolutely incredible. It was an incredible opportunity to race and as a group we’re immensely proud to be a part of the Shiplake legacy.”

Tyrone Howe, head of the school, said the crew has put women’s racing at Shiplake “on the map”.

He said: “Our girls said they wanted to create a little bit of history and they’ve just done that. We have a head of girls coach, Dan Safdari, and he’s made an immense impact.

“They are incredibly hard-working so it’s really nice to see that paid off. I felt relief more than anything else when they won because at the start of the season it was so unknown about going into this regatta so there was more pressure on them.

“So it’s nice they’ve done themselves proud. The thing is we want to build on this but it’s a big decision for the school to go ahead with more women’s racing at the school as it means bringing in girls at a younger age and training them up.

“But they have these positive role models now – these girls have taken a big step in this decision.”

Two Shiplake crews competed in the Diamond Jubilee Challenge Cup but the “B” crew lost in the second heat on Friday to St Edward’s School by a length-and-a-half.

They previously beat Trentham Boat Club in the first heat on Thursday by three-and-a-quarter lengths.

Shiplake College also entered The Princess Elizabeth Challenge Cup but lost to St. Joseph’s Preparatory, USA by half a length in the second heat on Thursday.

A crew also entered the newly introduced Wargrave Cup but lost to Thames Rowing Club in the first heat on Thursday by two-and-a-quarter lengths.

Henley Rowing Club reached the semi-finals on Saturday in The Thames Challenge Cup but lost to Thames Rowing Club by a length and a half.

Henley also competed in the Wargrave Cup but lost in the first heat on Wednesday to Tyne Amateur Rowing Club by two-and-a-half lengths .

Reading Blue Coat School competed in the Princess Elizabeth Challenge Cup which they lost to Eton College in the second heat on Thursday by one length.

The Oratory did not enter this year’s regatta as the regatta was postponed by a month due to the coronavirus pandemic meaning pupils were on their summer holidays.