I put trophy on display the wrong way 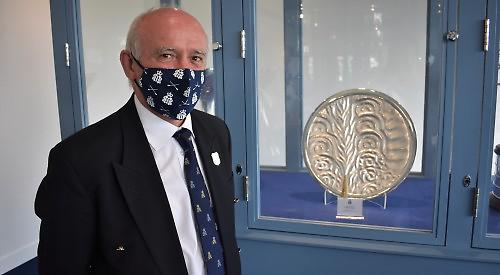 THE three new trophies for women’s events, the Island Challenge Cup, the Junior Women’s Eight plate and the Wargrave Challenge Cup, were displayed alongside the others in the prize tent in the stewards’ enclosure.

All the trophies are maintained by Simon Carter, whose wife Christine is the engraver.

He said: “The athletes only get half an hour with them before they come back to me, usually smelling of champagne. I really love the new ones, especially the Junior Women’s Eight because we all recognise that pattern which appears on the water behind the boat.

“I was actually displaying it on its side for a few days until somebody pointed out that it’s meant to look like the wake of a boat viewed from above.

“Like the new cups that were introduced in 2018, they tie in nicely with the theme of flowing water and it’s quite a creative interpretation.”